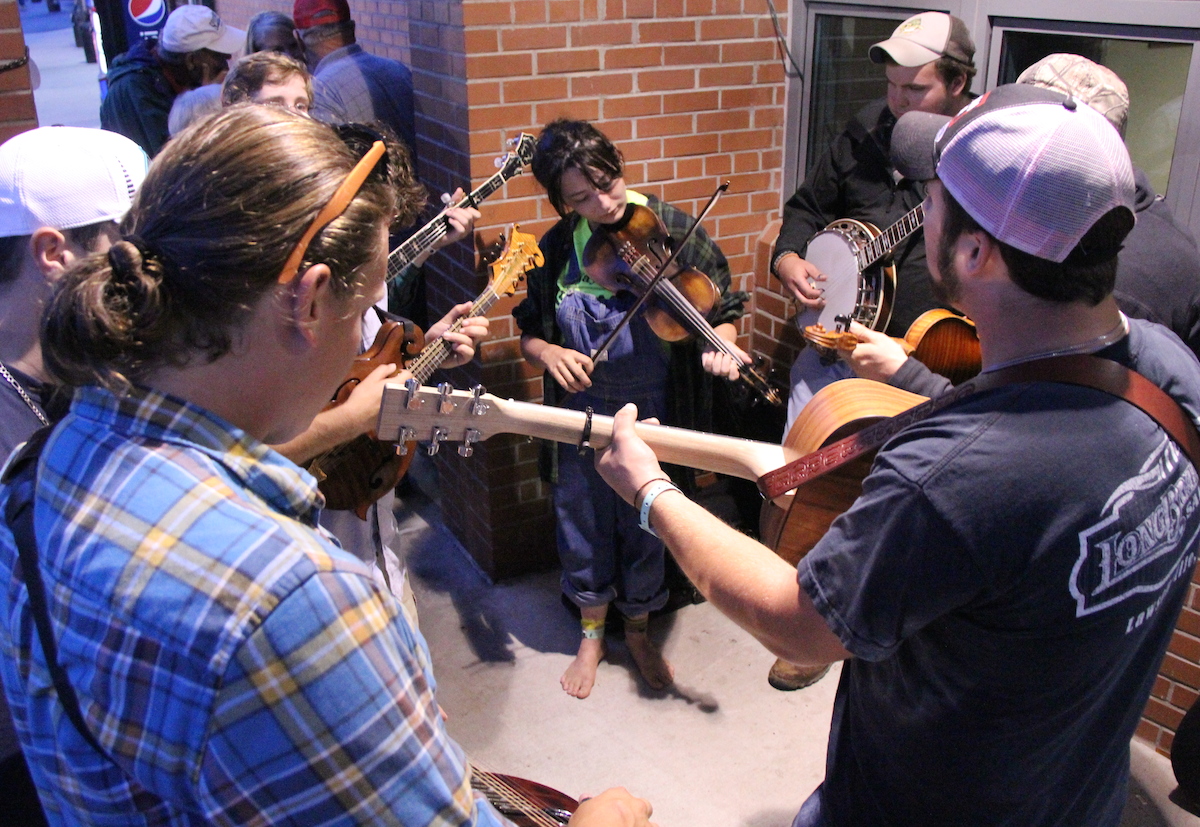 This is the first in a series of articles examining the parallels between the history of the Baptist church in America and the history of Old-Time String Band Music. Why it matters, here.

Whenever I feel a little homesick, it isn’t for the place where I was born.  Virginia Beach, Virginia, is a combination tourist and military town that few people call “home” and which never felt like “home” to me then or now. “Home,” the place where I felt loved and accepted unconditionally, occupied the geographic expanse between the Blue Ridge Mountains of Virginia and the Smokey Mountains of Tennessee.

Galax, Virginia has long been designated the “World’s Capital of Old-Time Mountain Music”. Its contribution to country music is so foundational; Galax was featured in the very first episode of Ken Burns’ “Country Music.” When I saw that segment I knew Burns had done his homework. I immediately called my father. Galax, had made the big time![1]

Actually, every August Galax goes “big time” when thousands of musicians and old-time music fans risk their RV’s on those winding Blue Ridge Mountain roads to hit the stage erected by the “men of the Moose” in Felts Park. The Old Fiddler’s Convention began in 1935 as a fundraiser for the then new Moose Lodge (#733) and, is now the oldest continual and largest fiddler’s convention anywhere. [2]. But its growth has been in size rather than in sophistication. The convention is a bit bluegrass, a bit “O Brother Where Art Thou,” and contestants compete in various individual instrument, vocal, and string band categories. The MC’s for the event keep it casual: “Friends and neighbors, Clarence is going to play you a tune I’m sure you’ll like…Go on Clarence!” (Goertzen, 36, 37). At that point Clarence and his band of banjos, dulcimer, fiddles, upright bass and whatnot take to the stage, and those who know the Appalachian style of flat foot dancing take to the plywood dance floor, along with enthusiastic children. There’s always plenty of warm applause for each act, and a few woops and yells if the fiddles are especially lively.

At the heart of this festival of fiddl’n is the love of the music. Wind your way along the muddy straw path between the pickups and RVs parked on the ball field behind the stage, and there you’ll find some of the week’s best old-time music. Fiddlers trade tunes and tips, and friends and families hold mini reunions under the canopies of makeshift tents. These spontaneous jam sessions are what someone more southern than I would call the “potlicker” of the whole experience, the tastiest bit at the bottom of the pan where all the good juices blend together.

And in Galax this musical spontaneity doesn’t stay down at Felts Park with the fiddles on Friday night. It flavors everything including the church service on Sunday morning. If Pastor Ted Bartlett, (who is my father’s uncle Mack’s nephew, but on the other side) felt a song coming on mid-sermon, then on it came! He would pause, grab his guitar from behind the pulpit, and set to strumming. Occasionally he would call on members of the congregation to join him down front and sing harmony. The last time I visited the church with my grandfather, Pastor Bartlett called me up on the platform to sing along!

The first fiddling contest for which we have written record, was held in 1736 in Hanover County Virginia as part of a St. Andrew’s Day celebration for the area’s many Scotch-Irish settlers [3], but the fiddle arrived on the scene in Virginia much earlier. In 1618 Thomas Lanier, a fiddler in the court of King James, thought to make his fortune in the New World. John Utie, who had been a “fidler in England” and hoped to make a “living by fidlinge”, followed him soon after in 1620 (Keller, 190).  West African gourd fiddles came to America with slaves and those musical skills easily transferred to the European fiddle. Documents from the mid sixteen hundreds describe street parties with “Negro” fiddlers playing for black and white dancers in the Dutch settlement of New Amsterdam. And enslaved musicians routinely provided the music at parties and balls throughout the plantation south (Giddens, 7).

But in colonial America, up through the early 1900s, nothing so formal as a contest. or ball was necessary for someone to strike up the fiddle, or a fiddle and banjo duet. Barn raisings and corn shuckings often featured string bands as entertainment for those who came to lend a hand. And because people came from miles around to attend, you needed an instrument that was portable and could be learned without much formal instruction[4]. A harpsichord wasn’t going to cut it in the rural south. The music and the dancing at these gatherings were the “payment” in a cashless economy, for those who came to lend a hand (Davidson, 2). These were major cooperative community events that bound people together, including Baptists who began to increase in number in Virginia in the 1750s.

The Baptist historian in me wonders if it’s not for nothing that Baptist churches and fiddle music spread throughout the colonies in the 18th century. Faith for Baptist believers is a “personal, experiential and voluntary” according to Baptist sage Walter “Buddy” Shurdan (9). No one can do your faith for you-not your family, your government, not even your church, or a whole convention of churches. Instruction is not a bad or unwelcome thing, but at the end of the day each Baptist has the right and ability to interpret the Bible for herself in light of the life of Jesus and under the guidance of the Holy Spirit. And Baptists didn’t believe in this type of religious freedom for themselves alone. They fought for the rights of all persons to follow their conscience in matters of faith.  These Baptist principals resonated with independent, democratically-minded 18th century colonists and led to the establishment of many Baptist congregations during that time.

“Baptists didn’t believe in this type of religious freedom for themselves alone. They fought for the rights of all persons to follow their conscience in matters of faith.”

Much about the Baptist belief system is not all that different from the ethos of these old-time string bands. A string band has its own democratic ideas. The banjo and fiddle collaborate on the melody with the banjo providing additional rhythm. This partnership of banjo and fiddle “reenacts and symbolically honors democratic interaction between white fiddle and the African American banjo tradition (Inscoe, 37). Fiddle tunes are handed down from one musician to another and personalized in the transition. Each begins with the “basic model”, the bare bones of the tune or technique and then the individual player adds embellishments according to taste, ability, or inspiration (Davidson, 1). The lyrics to a song might change to reflect current events as in the folk classic “Tom Dooley, [5]” or remain unchanged for 400 years like the folk standard “Barbara Allen[6]”.

Likewise, while Baptists have no creed, they do have shared theological ideas that have been handed down, a “basic model” that individuals embellish and interpret based on their experiences with God and one another. It’s a faith based on practice. You’ll never figure out the grace notes or learn any new tunes leaving your fiddle on the shelf. It’s the same for Baptists, whether alone or together. And in Virginia, this faith and these tunes are still being handed down.

This summer would have been the 85th Old-Time Fiddlers Convention held by the Loyal Order of the Moose. Last August, 30,000 people gathered to perform and enjoy old-time and bluegrass music in Galax. That number is five times the population living there the rest of the year. Anthropologists recording Galax fiddlers in 1958-1961 were concerned that the old-time instrumental techniques, like the clawhammer banjo lick, would die with the old musicians, but fortunately their fears were proven wrong (Davidson, ) [7].

The Fiddlers’ Convention added a youth division in 2000 and the categories for all ages have expanded since those early days in 1935. For those who can’t make it to the ball field out behind the campers in Felts Park, the Internet provides a virtual tent village where musicians and aficionados can swap traditional tunes and techniques, and share new ones.  There are now entire websites devoted to mastering the clawhammer technique.

“compelled to live our life together as a church in a virtual tent, we have an environment that …encourages a fuller democratization of the church body so prized by those early Baptists. New voices from the margins have an opportunity to be heard, and their insights valued.”

Perhaps there is a model here for Baptist churches. As we struggle with what church looks like during and after the present pandemic, there are those who grieve the loss of church traditions. But removed from the rigidity of physical and social structures, and compelled to live our life together as a church in a virtual tent, we have an environment that allows for greater spontaneity and sharing of spiritual “embellishments” both old and new. Such an arrangement also encourages a fuller democratization of the church body so prized by those early Baptists. New voices from the margins have an opportunity to be heard, and their insights valued. But only if we as the church are intentional about making our virtual tent a “big tent” and welcoming to others.

Shurden, Walter B. Not An Easy Journey: Some Transitions in Baptist Life. Mercer University Press, 2005.

[1] Even bigger than that time a recliner made at the furniture factory in Galax was featured as a prize on “The Price is Right.”

[2] I’ve seen claims that Galax has the oldest fiddler’s convention and largest convention in different sources, but since all my Galax relatives love to embellish a story, I’m not surprised that residents would lay claim to both.

[3] The St. Andrew’s Day celebration was organized by “some merry disposed gentlemen.” In addition to the fiddle contest for which an Italian Cremona fiddle would be awarded, there was also the prize of a saddle for winning the horse race, and various other prizes for dancing, singing, “foot-ball-play,” jumping, wrestling,  and a pair of silk stockings for “the prettiest Maid on the Green.” The event was held at the tobacco warehouse in Hanover County  (Maxwell, 30).

[4] Even the 1736 contest was for “amateurs only.” Mr. Langford’s “Scholars” whomever they were, were specifically excluded from participating.

[5] Tom Dooley was a folk song based on the real life murder of Laura Foster by Thomas Dula 1866.

[6] The British “Barbara Allen” Samuel Pepys’ 1666 diary, eventually became “Barbr’y Ellen” when she journeyed to the southern US.

[7] To hear clips from The Old Fiddlers Convention in Galax, Va. Check out the Smithsonian Folkways recording here. You will not be disappointed.

A few years ago, a documentary about the Old Time Fiddler’s Convention was made by producer Julie Simone. Titled “Fiddlin'” it captures the heart of the people and the music and it is available to watch online. Here’s the trailer: