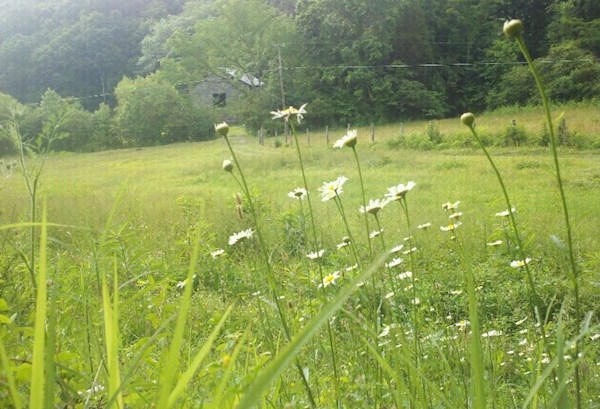 Some of my fondest memories are of my Grandmother’s house in Tennessee.  It wasn’t a large house. To this day I have no idea how my mother, her parents and all seven of her siblings lived together in that tiny space, but every inch of it was special to me. I remember lying awake at night on a palette of blankets, listening to the trains whistling in the distance.  Because there was no central heating, in the winter my cousin and I would huddle with our books and dolls behind the mammoth oil heater. There was no central air conditioning either, just a fan in the living room. But that never bothered us as much because during the summer, we spent most of our days outside on the back porch.

My grandparent’s back porch with its wind chimes and worn wooden planks provided a shady respite from the Tennessee sun. The steep slope of the yard, made it the perfect place to fly paper airplanes and blow dish soap bubbles with our homemade bread tie bubble wands. In the evenings my dad and grandfather would sit outside on the porch talking politics while we ran around in the cool grass chasing lightening bugs. When we were teenagers my cousin and I moved our huddle to the porch swing to gossip about school and boys. And later,  when marriage and ministry were stressful, I spread out my yoga mat on that porch with its weathered green paint, and found solace between the milk crate ottoman and ceramic planters.

I was an adult before I found out the truth. The back porch was not in fact the back porch at all. What I had always thought of as the “back porch,” was actually the front porch. Unlike the other homes in the neighborhood, my grandmother’s house was actually built facing away from the road so that when you parked “out front”, you were actually “out back.” It was the door on the porch, the one you had to walk around the house to access, that actually opened into the main part of the house. Which raises the question, “ Why would someone build a house facing backwards?

It turns out that the house’s original owner was a woman who, like my grandparents, had moved down from the mountains into the “city”. Her mother, however, still lived up on the hillside. So when that first owner had the house built, she oriented it away from the gravel road and toward the foothills. That way she could be on her porch or in her yard and wave to her mother up on the ridge.

Having lived most of my adult life anywhere from 5 to 25 hours away from my own mother, this desire to connect resonates deeply with me. The story of the back front porch, also reminds me how important it is to consider how we orient our lives, toward relationship with God or away. It’s easy to be distracted by what’s coming down the road; the noise, the dust, the skittering gravel, the “what if” that diverts our attention or stokes our fears. Having lost my brother, I am continually afraid of losing those I love. I’ve often found myself making the rounds at midnight, checking to be sure everyone, including the cat, is still breathing. Sometimes it feels safer to be on the look out for loss rather than focus on the relationships right in front of me. This can make the work of re-orienting toward God especially difficult. I’m also a dreamer, so I am easily distracted by the possibility of the road and the rush to wherever I think it might take me. It always seems preferable to where I am. To anchor my attention requires focus and effort.

Lately, I’ve been feeling homesick for the hills, and a little homesick too for God’s presence and assurances. Then Psalm 121 flitted into my mind like one of those Tennessee lightening bugs, so I’m doing my best to catch the meaning in those verses and let them light my way.

I lift up my eyes to the hills—
from where will my help come?
2 My help comes from the Lord,
who made heaven and earth.

3 He will not let your foot be moved;
he who keeps you will not slumber.
4 He who keeps Israel
will neither slumber nor sleep.

Like the woman with the back-facing front porch, the Psalmist raises his eyes to those far away hills that have always been a source of strength and comfort.

Throughout the Hebrew Bible high places, like hills and mountains, are the setting for encounters with God. Moses meets with God first in a burning bush and then later in a cloud atop two different mountains. Amos and Micah prophesy that the high places of the earth are where God will walk again in the age to come (Amos 4:13, Micah 1:3). So, it’s no wonder that the mystery of the mountains inspires early worshippers to center their religious practices there in 1 Kings 3:2. Later Solomon would build the temple on what would come to be known as Mt. Zion. In fact Psalm 121 is categorized among those “Psalms of Ascents,” a genre of song performed by pilgrims on their way to Jerusalem to worship at that very temple.

But what if the traveler in question is a “disillusioned pilgrim” as Bob Becking suggests? What if, when the speaker raises her eyes to the hills, she doesn’t see God, or assurance, or…anything? What then? Noted Hebrew Bible scholar, Robert Alter, makes the case that poetry in the Bible “by using complex linkages of sound, image, word, theme (etc.)…is an instrument for conveying densely patterned meaning, sometimes contradictory, that are not readily conveyable through other means (p113).” This raises the possibility that the answer given in the second verse, “My help comes from the Lord,” could be a pat answer to the question asked in the first. This Psalm could be an expression of a crisis of faith.

When I look at Psalm 121, I see hope for devoted and disillusioned pilgrim alike. We’ll take a look at that in Part 2.

Going Out and Coming In