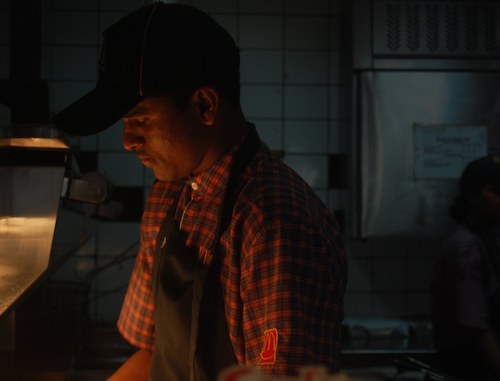 News of the McDonald’s sample budget first broke three weeks ago in the shadows of the Trayvon Martin decision. Initially, the budget received a fair amount of media coverage but has since faded.  This post is my attempt (however feeble) to keep the story alive. I was very glad to hear Lawrence Mishel of the Economic Policy Institute reference it on The Diane Rehm Show this past week. The more attention it gets, the better.

I want to call attention to this issue because the implications of “McBudget,” as Al Lewis and others have dubbed it, reach far beyond line items and expense amounts.   “McBudget” is a snapshot of what might be termed “Maconomics”:  the impoverishing realities of an inequitable system that millions of underpaid American workers face each and every day, and the cavalier (if not ignorant) attitude that highly compensated executives have toward life lived at or near the minimum wage.

Time Magazine is where I first learned of McBudget, developed by McDonald’s for its “average” workers, but the story originated at ThinkProgress.org.

The Time article, like much of the media’s coverage, focuses on the unrealistic nature of many of the budget items: $20 per month for health insurance, for example, along with $150 for a car payment, $100 for auto/home insurance, but $0 for gas to make said car drivable. The rent allowance is also woefully inadequate, especially for most of America’s urban markets.  Here in DC, $600 might score you a room for rent – in someone’s basement in what used to be a closet.  If you could somehow find an apartment for that rate, it wouldn’t be much bigger than a closet and it would be in a neighborhood where you’re more likely to encounter The Joker than Ronald McDonald.  The line item labeled “auto/home insurance” thus seems colored with the eerie ting of a self-fulfilling prophecy: on this budget, you might very well end up living in your car.

Perhaps the most jolting aspect of this sample budget, however, is that it assumes the “average” worker will have at least one other job.

That’s right: meeting each of these meager line items would require a person to hold at least two jobs, because they would have to work 70-hour weeks at $8.25 per hour to net $2,060 in a month ($515 per week) after taxes. And since $8.25 is actually a full dollar per hour MORE than the federally mandated minimum wage, the likelihood that someone truly making minimum wage could swing even these low-balled expense estimates is something less than zero.

As Laura Shin writes in Forbes, what McDonald’s has done in creating this budget is to unwittingly demonstrate (in very specific terms) that “its employees can’t live off the wages it pays” – unless, of course, you consider scraping by from one want-filled month to another “living.”

To help put the wages behind this budget into context, ThinkProgress cites a 2012 Bloomberg News report asserting that it would take the average McDonald’s employee “one million hours of work” to earn what the corporation pays its CEO.

I would look at it another way: McDonald’s reported earnings of $6.6 billion in the first quarter of 2013 – up slightly from $6.55 billion one year ago.  Those figures represent an operating profit margin of 31% – which is among the highest (if not the highest) in its industry.

McDonald’s high operating profit margin is significant because operating profit doesn’t arise from secondary business activities (returns on investments, licensing, and the like); it arises from what a business is in business to do.  For McDonald’s, that means operating profit comes primarily from selling Big Macs and Happy Meals. It’s money made almost exclusively on the backs of the “average” workers for whom McBudget was designed – workers who are not receiving fair compensation for their labor much less a share in the fruits of it – workers who deserve better. McDonald’s would not be – indeed, could not be – in business without them.  If McDonald’s Chief Executive resigned tomorrow, the company easily could go ten or more months before filling that position.  If the “average” workers walked off the job tomorrow and didn’t fry the fries, grill the burgers, or run the registers, McDonald’s restaurants would not stay open ten minutes.

Yet, the Maconomic model is structured so that those who run a company live like princes while those who make it run struggle to eek out a living at all. McDonald’s compensation package for CEO Donald Thompson weighed in at 13.8 million in 2012. Assuming he paid at least 25% in taxes, (which he may not have) that’s $10.35 million net for the year – or $862,500 per month / $215,625 per week. Company reports further reveal that executive compensation for the seven (7) highest paid employees at McDonald’s (including the CEO) totaled $67,576,070 in 2012 – up 232% (!) from the previous year, even though the company’s stock price declined nearly 10% in that same period.

In the world of Maconomics, these seven people (regardless of company performance) deserve close to $70 million, while the “average” worker deserves McBudget.

There are those who argue that Maconomics is the inevitable outcome of free markets; that, despite its flaws, it represents the best workable model for economic growth and produces the greatest benefit for society as a whole; that a low-paying job is better than no job at all, and increased government regulation of businesses (such as raising the minimum wage) will only yield higher unemployment.

I find such arguments socially untenable – especially in a democracy and particularly in America where “life, liberty, and the pursuit of happiness” is supposedly gospel.  McBudget infringes upon all three of these “inalienable” rights.  Furthermore, it’s hard to argue that Maconomics is the best model when it’s hard to see how anyone is truly benefiting from the model other than America’s CEOs, CFOs, and Executive VPs.  Across the board for the past 40 years, the percentage of America’s national wealth controlled by the top 20% has increased exponentially.  Currently their share stands in the neighborhood of 90%.  The top 1% alone hold 24% of the national wealth unto themselves.  Meanwhile, for everyone else (80% of America) wages have remained flat, purchasing power has declined, and net worth has eroded even as the productivity of the American workforce has continued to improve.

It hasn’t always been this way, so why should we believe it “has to be” this way?

Maconomics is even harder to justify morally and spiritually in light of THE gospel.  Love thy neighbor as thyself (Leviticus 19.18/Matthew 22.39).  In everything, do unto others as you would have done unto you (Matthew 7.12).  The laborer is worthy of his hire (1 Timothy 5.18).  The Parable of the Rich Fool (Luke 12.15-21).  The list could go on.  It even clashes with “anyone unwilling to work should not eat” (2 Thessalonians 3.10), a favorite verse of John Smith and still popular with political conservatives.  McBudget represents an entire class of people who are working – hard – and yet cannot afford to eat, at least not very well.  Note there is no line item for food in McBudget.  Food, clothing, gas, toiletries, and other basic necessities would all have to come out of the $800 per month allocated for “spending money.”

But nothing in the New Testament is as pertinent to the spiritual implications of Maconomics as a story Jesus tells about a poor man named Lazarus who lives camped outside a rich man’s house (Luke 16.19-31).  Despite the proximity and consistency of Lazarus’ presence, the rich man doesn’t notice him let alone feel any compassion for him.  The rich man whiles away his days in luxury while Lazarus suffers, until they both die.  From the torment of Hades, the rich man looks up and finally, for the first time, sees Lazarus – reclining in the bosom of Abraham.  The rich man begs Father Abraham to allow Lazarus to touch his tongue with a drop of water, but Abraham refuses.  The rich man (prefiguring Jacob Marley) then pleads for Abraham to warn his brothers, who are still alive, so they might be spared his fate.  Abraham’s response: they have Moses and the prophets; they should listen to them.

Jesus is speaking to His followers here.  The suits on Wall Street and our representatives in Washington may not care what Jesus says. They may not care about the “average” workers at McDonald’s or any other corporation beyond their costs and their labor.  But Christ’s disciples should care, and we should listen. Listening means we cannot continue to turn a blind eye, especially a willfully blind eye, to the inequities of 21st century America. Through the window of McBudget, we have caught a glimpse of Lazarus – behind the counter if not on our doorstep.  We’ve seen how stark the realities of Lazarus’ situation are. The question is: will we be moved by what we see?  Will we be moved to ask questions?  Will we be moved to demand action?  Or will we will continue to grab our food and go on our way – unconcerned with value beyond the menu?