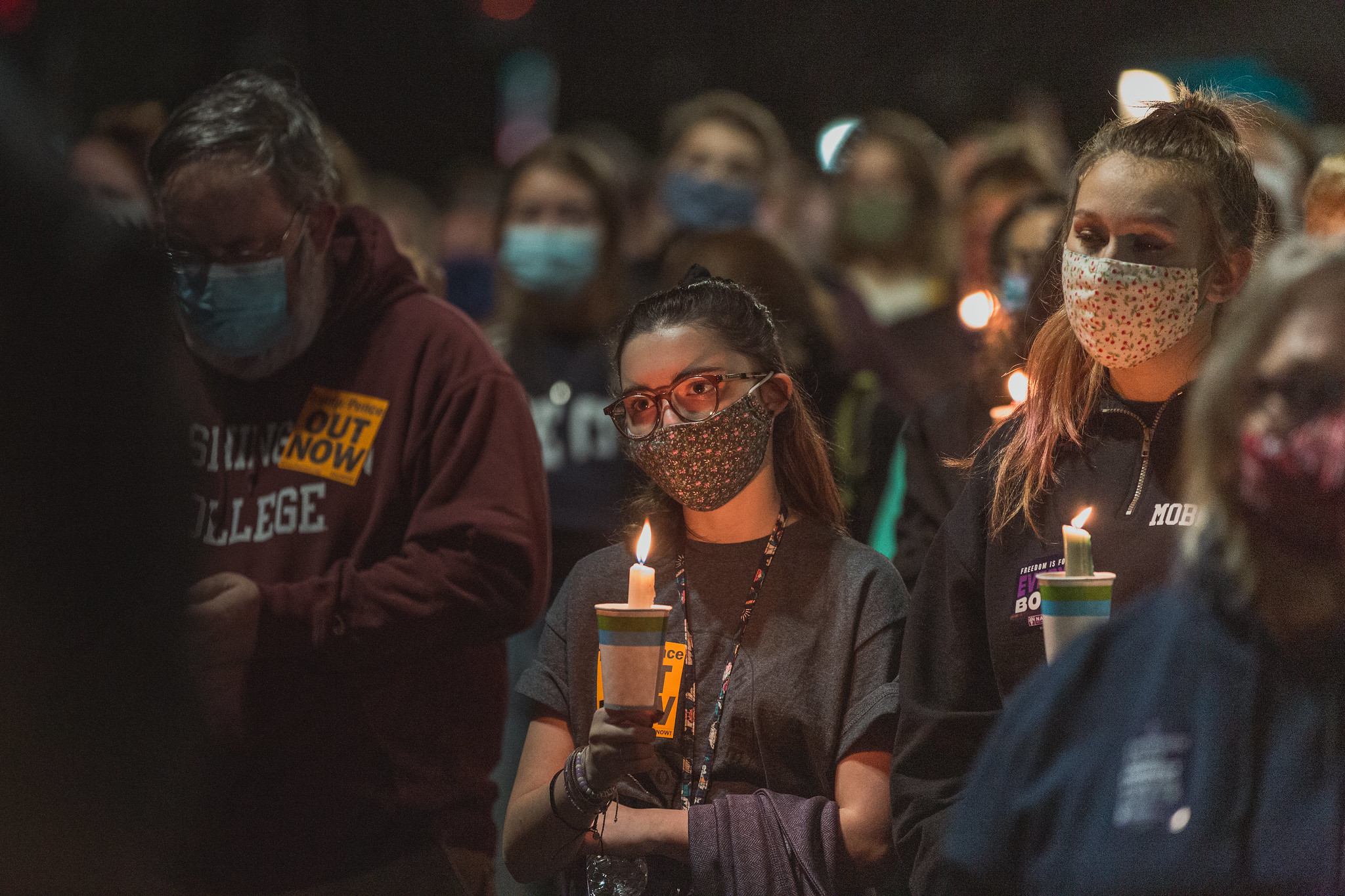 So many women in my life and in my podcast playlist are lamenting the loss of Supreme Court Justice Ruth Bader Ginsburg. Her presence on the court gave us hope that progressive views might yet prevail in spite of political machinations. Her legal opinions validated our experiences of misogyny and marginalization and she became our voice of dissent. So when that voice fell silent on September 18, those who shared her ideals were left speechless and bereft.

My friend, artist and activist, Rachel Loughlin, channeled her grief into a sobering poem about the darkness so many of us were feeling and fearing. Nerd that I am, I started researching.  Nothing grounds me quite like learning.

The most interesting find of my investigation was a newspaper article on Ruth Bader Ginsburg’s Jewish faith that mentioned an essay she had written in conjunction with Rabbi Lauren Holtzblatt at Passover for the American Jewish World Service’s “Celebration and Compassion” series in 2015.

True to her reputation as a feminist, Ginsburg’s essay focuses on the female characters in the Exodus story and their accomplishments because, “The stories we tell our children shape what they believe to be possible.” The text for her reflection is drawn from the Exodus narrative of Moses’ birth and its accompanying midrash.[1] She applauds the brave midwives, Shifrah and Puah, and Yocheved, Moses’ mother, who all defy the Pharaoh by disobeying his directive to kill all newborn Hebrew boys. But the protagonist Ginsburg devotes the most attention to in her essay is Moses’ sister, Miriam.

In the midrashic tradition, Miriam prophesies about Moses’ destiny before his birth, saying, “My mother is destined to bear a son who will deliver the Jewish people to salvation.”[2] When their house fills with light at the birth of Moses, Miriam’s father kisses his daughter on the head and praises the fulfillment of her prophecy. But then the scene swiftly shifts to the bank of the Nile where Miriam is watching the infant Moses float away in his basket of papyrus. This time her father raps her on the head demanding, “Where is your prophecy now?” Miriam is left alone, watching from afar waiting to see what would become of the rest of her prophecy.

And now, here we stand. As many of us have stood before in our lives, watching our hope drift farther and farther away.  The light of a bright future, like the light that attended Moses’ birth, seems all but extinguished, and we begin to doubt if it had ever been there to begin with. Yet, Miriam does not give up on the source of her hope and deliverance. When Batya,[3] the Pharaoh’s daughter, defies her father’s decree and rescues Moses from the Nile, Miriam boldly steps forward and asks if she might find a Hebrew woman to nurse the baby (Exodus 2:7). It’s an exchange we often overlook because the story is so familiar. But here we have an enslaved Hebrew child braves barriers of race and class to address the daughter of the Pharaoh so that she might save her brother and her people.

These daughters, mothers, and midwives had a vision for the future that they would not relinquish to the darkness. They refused to listen to the powers and the patriarchy aligned against them and took action. Rather than give in to despair and her father’s doubt, Miriam helped make her prophecy a reality. Now we must do the same.

“The Passover story recalls to all of us—women and men—that with vision and action we can join hands with others of like mind, kindling lights along paths leading out of the terrifying darkness.”

Ruth Bader Ginsburg points out that, in Genesis, God alone is the source of light, but in Exodus, “God has many Partners, first among them five brave women.” That same God is with us and longs to partner with us to do justice as well.[4] Our desire for a world where an enslaved child is valued as much as the ruler’s daughter, mirrors God’s own. It will not be easy, but we are not alone in this struggle. As Ruth Bader Ginsburg says at the conclusion of her essay, “The Passover story recalls to all of us—women and men—that with vision and action we can join hands with others of like mind, kindling lights along paths leading out of the terrifying darkness.”

[1] .[1] A midrash is an interpretation of the Hebrew Bible written by ancient rabbis that extrapolates on the given text with the intention of clarifying conflicting passages or elaborating on given events or characters in the Torah. These interpretations can take the form of stories and their meanings are timeless.

[2] From Babylonian Talmud Megillah 14a which can be found online with other interpretive resources and the Hebrew text.

[3] This is her name in Babylonian Talmud, Sotah 12b. The passage in Exodus does not give her a name, but she is mentioned by name in Chronicles 4:18 and translated as Bithiah.

[4] I’m alluding to the verse in Micah 6:8, “..what does the Lord require of you, but to do justice, and to love kindness, and to walk humbly with your God.” But I wanted to point out that earlier in that chapter in Micah 6:4 God reminds God’s people that they were redeemed from slavery and had Moses, Aaron, and Miriam to lead them. It’s one of the few mentions of Miriam outside the Torah.