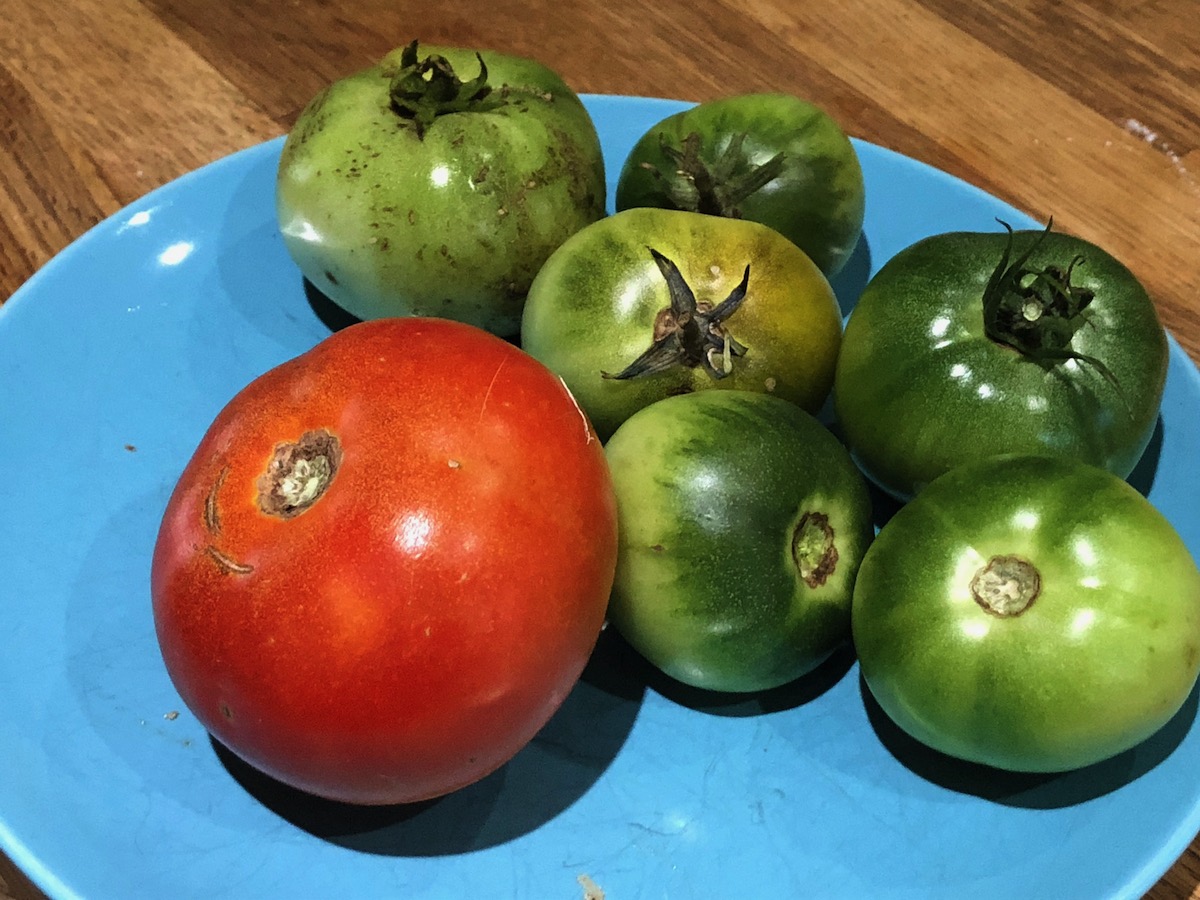 I don’t know when I first ate fried green tomatoes, but then again, I don’t remember ever not eating them either. If we had a garden, then more than likely as the days grew shorter and nights colder, there would usually be a few green stragglers left on the vine. But like those workers in Matthew 20 who were hired at the end of the day and yet received a full days wage, there is still hope for those green tomatoes.

I thought about this tonight as I was frying up the stragglers from our tomato harvest. In Canada the growing season is short, and the competition for sunlight fierce, so I was left with almost as many green tomatoes as I had red ones three weeks earlier. Well, I have a heart for the misfits and the marginalized, so perhaps that was as it should be. Because nothing says “redeemed” like fried green tomatoes. Just when the lot of those left behind looks hopeless…Love.

I remembered that old hymn we used to sing in church with the chorus that went:

Now the first verse of this hymn, “I was sinking deep in sin” is, I admit, awkward to modern ears. I get that. Many of us grew up in churches that over did it on the “guilt” and “sin” theology (sort of like I over did it eating tomatoes tonight), and we are left untangling the metaphysical mess they left behind. It’s awful. But don’t get too caught up in that, because God’s love cuts through the Gordian knot of guilt, sin, and shame. Skip to the chorus:

When nothing else (or no one else, not even me) could help

The workers in Jesus’ parable who were hired at the end of the day to work in the vineyard were just as valued by the landowner as those hired at nine in the morning. It wasn’t because of who they were or some special skill they possessed. If you’re a day laborer still standing around at dinner-time looking for work, then there’s a reason, just or unjust, why you didn’t make the noon time or three o’clock cut. No, those who were hired last were deemed worth the same denarii as those who labored in the heat of the day, because of the landowner’s promise.  And like the landowner in the story, God has a promise too. God’s amazing, societal-upending promise is that “the first shall be last and the last shall be first”.

No one is left out of God’s Love. From the choicest, cream of the crop red tomatoes to end of the season, under the wire, green tomatoes. And, no one is beyond the reach of God’s Love, no matter how deeply they seem to us to be sinking. We don’t know other folks’ growing seasons. We don’t know what they’ve had to overcome to get this far, and their struggles for sunlight. But, to quote the hymn, “Love so mighty and so true,” does. When God looks at those the world calls “last,” God sees first place winners.

And if you’ve tasted fried green tomatoes, then you know the last really can be first.

If you have never heard “Love Lifted Me” or haven’t heard it in a while, here’s Randy Travis singing that hymn live at a church in Orlando in 2003. Go ahead and sing along. Know that I’m singing too.