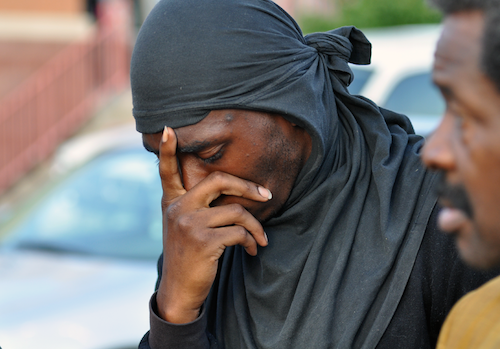 Since Michael Brown was laid to rest, “We Shall Overcome” has lodged in my mind – not the song so much as the title. We. Shall. Overcome.

I’ve needed these words these past couple of weeks. I believe we all need these words. In the wake of the tragedy and the ongoing unrest and mistrust in Ferguson, Missouri (in communities all across America, really), we need these words as a refrain, and as a reminder. Here are a few thoughts on why I think these words matter so much, especially if we want a world in which there is progress…in which we witness fewer funerals like Michael Brown’s.

This first word is the fulcrum for change. The way forward is the way of togetherness, shoulder to shoulder if not hand in hand. No individual, no matter how brilliant, charismatic, connected, or celebrated, will be able to shift the poles of our society. Individuals certainly have a role to play in stirring up waves of revival and revolution: exposing uncomfortable realities, speaking truth to power, choosing to stand up rather than sit out, setting examples that defy stereotypes. But it is the collective response that will carry the day.

The people must rise up. The people must demand better. The people must say enough is enough. For there to be real, lasting progress in America, systems will have to change, and systemic change requires seismic force – the kind of force that can only be generated when people march in step and lift their voices in unison.

This second word reminds us that the future tense still applies to the dreams of the Civil Rights Movement. In the wake of so many shootings (Michael Brown, Trayvon Martin, Sean Bell, Kimani Gray, Kendrec McDade, Timothy Russell, Amadou Diallo, Timothy Stansbury, Jr., and on and on)… in the shadow of a prison industrial complex that incarcerates blacks at six times the rate of whites … under the auspices of a criminal justice system that is much more likely to sentence black men to death – via execution or permanent disenfranchisement … we can no longer pretend that we conquered prejudice and inequality when we felled the walls of Jim Crow “back then.” We might share the same water fountains these days, but we’re a long way from sharing the same cup. The jobless rate among blacks remains above twelve percent while the jobless rate among whites has fallen to below six percent. Blacks currently hold six cents for every dollar in assets held by whites. Even if a black man currently resides in the White House, white is still very much the color of power, wealth, and privilege in America.

This gap between white and black in our nation, where all men are supposedly created equal, is wide and deep. In some respects, the gap is so wide and so deep that if we ponder it with even a modicum of honesty, it might well drive us to despair. How can we bridge such a gap, much less fill it in?

That’s why we must remember “shall” is more than the future tense. It’s also the tense of hope. “Shall” means there is no question as to what will occur. It will occur – or else. If you receive a summons in the mail that states you shall appear in court on a given date at a given time, you are expected to be there. It doesn’t matter if your sick child keeps you up late the night before, or there’s a traffic jam that morning, or the time conflicts with a meeting at work. You are obligated. Your presence and participation are required. “Shall” declares that there aren’t any excuses.

We need to develop a moral resolve around this word “shall” that matches its legal resonance in order to keep moving forward. As wide and deep as this gap currently is, it has been wider and deeper. The parts that have been filled in have been filled in by people who believed the gap could be filled – that it shall be filled – one day.

This third and final word reminds us that if we want to see change, we’re going to need more than optimism, or even resolve. We’re going to have to fight for it. We must fight without hatred and never in pursuit of vengeance, for if we respond in kind we accomplish nothing except the substitution of one violent scheme for another. But we must fight nonetheless. We will have to fight because there will be resistance – active and passive, physical and political. The way forward is up – against the pull of gravity, against the social, economic, and ideological currents (and constraints) of our society. It won’t be easy. If the forces aligned against justice and peace lacked power or weaponry, we would not have to overcome them. Overcoming anything is never easy. But it need not be complicated.

The word “overcome” provides a clue as to where we can (perhaps should) begin. “Overcoming” in the way of peace starts with a simple choice: the choice to come over, to give and receive invitations, to gather around tables, to share meals, to start and join conversations, to lend a hand, to explore the world outside our bubbles of comfort and familiarity. Through the connections that are made through personal interactions, hearts can be softened, minds can be renewed, relationships can develop, and partnerships can form. All of which, not surprisingly, brings us back to “we.”

May we go forth and fight the good fight. Our lives and our souls depend on it.