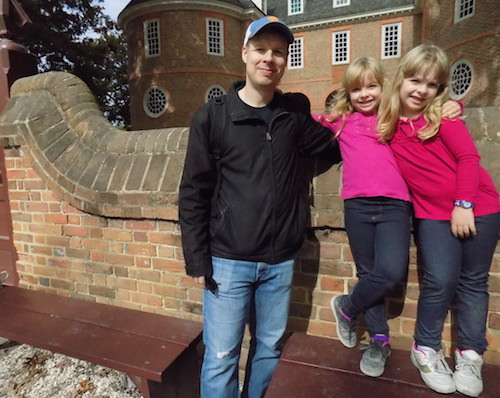 Last September, Kristen and I took the girls to Colonial Williamsburg. They were studying the American Revolution in school, and we wanted them to see one of the main stages on which that history unfolded. Plus, there would be horses – so even if Mary and Emma were completely underwhelmed by the history of the place, we couldn’t really go wrong.

We drove down on a Saturday morning to meet friends we hadn’t seen in awhile, and see the sights. The College of William and Mary was playing a home game, so the roads were crowded. Green and gold flags fluttered on passing cars and you could smell the first traces of Fall in the breeze.

Bruce Springsteen wafted through the open window of a pickup truck. I am pretty sure it was “Dancing in the Dark.” I know it was Springsteen, though, because I remember thinking the tune was both apropos and ironic: one American icon being played on the streets of another, both espousing the spirit of our nation – but telling very different stories.

We walked down the Main Street, peaked in the shops, ran on the green; put the girls in the stocks; bought food and souvenirs and pack of AA batteries. We snapped pictures and, yes, petted every horse between the parking deck and the capitol building. And everyone around us was doing pretty much the same – milling about at their own pace, seeing what they wanted to see as it suited their fancy.

Until 1:00 p.m. At one o’clock, the streets cleared, and the sidewalks filled up. Everyone could hear the rumble in the distance and we half walked, half jogged down the sidewalk to find a good spot. The fife band was coming and everyone wanted to see them march.

Their flutes and drums filled the air with 18th century patriotic music. You heard them whether you wanted to or not. Even some of the costumed workers, who must have seen this spectacle dozens if not hundreds of times, stepped out of their shops to catch a glimpse of the parade.

Steadily and in perfect time to the beat, they made their way from the capitol toward the palace green. A few tourists kept pace with them as they went but many, like us, stood still and watched them go, following them with our eyes and our iPhones rather than our feet. Then, as quickly as they had come, they had gone – and we ambled back into the street to resume our strolling and browsing. Like the sea absorbing the wake of a passing ship, there was soon little evidence that they had passed through – other than the distant echo of their drums.

I imagine a similar scene must have unfolded just outside Jerusalem as Jesus made His way into the city – though the home team wasn’t just playing any game that week. Passover was coming, and the streets of Jerusalem would have been teaming with pilgrims from all over Mediterranean and the Near East, along with military reinforcements from Rome sent to keep order in a city swelling both with people and nationalist zeal.

Many travelers would have been welcomed as they entered Jerusalem. According to some rabbinical writings, priests read the words from Psalm 118 as a blessing over the caravans of pilgrims as the passed through the gates of the city in advance of the major festivals of the Jewish calendar.

As they make their way, people begin  cutting branches from the trees and waving them in celebration. Others spread their cloaks on the ground in front of Him. Yet, this king is riding on the humble colt of a donkey rather than a noble horse.

Something interesting is going on here. And it must have been quite a spectacle indeed.

The religious authorities are quite put out by what they are seeing, and hearing. To the Pharisees’ eyes and ears, the behavior of Jesus’ disciples is blasphemous, not to mention vulgar. We might wonder if the patrolling soldiers heard chants that bordered on the treasonous. And so a group of Pharisees decide to say something. They tell Jesus to tell these people to pipe down, be quiet. Be more respectful of the occasion for which you are making your pilgrimage

But Jesus is having none of it. Not only does He tell them He will say no such thing, He declares it wouldn’t do any good even if He did. “I tell you, if these were silent, the stones would shout out” (v. 40). So, as He makes His way into Jerusalem, Jesus and His followers are already turning Passover on its head. And the Pharisees ain’t seen nothin’ yet.

But as we sit here today, and recall this story; as we hear Jesus’ words of reproach to those stuffy, mean ol’ Pharisees we shouldn’t be too quick to wave our palm branches in their face.

Because, just like a Bruce Springsteen song, the upbeat rhythms and melodies of Palm Sunday carry a lament for an uncomfortable reality. If we’re not careful, we can get so caught up in the tune that the beat masks the message.

Christ isn’t coming to Jerusalem just to silence the Pharisees. He isn’t coming as a conqueror already victorious. He’s coming to die: to be crucified on orders of an imperial magistrate, based on the recommendations of a kangaroo court, convened to preserve the status quo under the guise of upholding the law.

And Jesus is coming to die on that cross because Pharisees and Roman magistrates are hardly the only ones who have gone astray, who have missed the mark; who don’t get what’s going on, who don’t understand what all this spectacle is really about. The people chanting psalms and waving palms all around Jesus don’t fully understand, either – and neither do we. Not really. Not if we’re honest. And to a degree, we can’t understand – no matter how hard we try. Because what God is up to defies all earthly understanding and precedent. Luke says as much, albeit subtly.

Embedded within the words the disciples are chanting is an allusion to the song sung by the angel choir over the fields of Bethlehem at Jesus’ birth: “Glory to God in the highest, and on earth, peace, good will toward men” (Luke 2.14).

Here the chorus is similar – but notice earth no longer figures into the equation. “Peace in heaven, and glory in the highest heaven!” (Luke 19.38)

Christmas is about heaven and earth colliding, as God came to Bethlehem in the person of Jesus Christ. But on Palm Sunday, heading toward Good Friday and onward to Easter, earth is being caught up fully in the arms heaven. There is no earthly reference point for what God in Christ has arrived in Jerusalem to accomplish.

“Christmas is about heaven and earth colliding, as God came to Bethlehem in the person of Jesus Christ. But on Palm Sunday, heading toward Good Friday and onward to Easter, earth is being caught up fully in the arms heaven.”

And regrettably, whenever God does something new, God’s people tend to miss it, either because we fail to see or refuse to see. Sometimes  we even actively resist it, along with those whom God sends to speak and act in God’s name.

And so, immediately after Jesus rebuts the Pharisees, He weeps over Jerusalem. He weeps over the entire city, not just the religious establishment or their political overlords.

41 As he came near and saw the city, he wept over it, 42 saying, “If you, even you, had only recognized on this day the things that make for peace! But now they are hidden from your eyes (Luke 19.41).

No doubt He is weeping over us, too, as we sing our Hosannas and wave our palm branches. Because just like the disciples of long ago, who came out to celebrate Jesus when He rode into Jerusalem, too many of us will simply return to our strolling and browsing after He passes through.

But if we are disciples, that’s not why we should come out and the side of the road isn’t where we should stand. Even if we do not and cannot fully understand, just like Peter and Andrew and James and John before us, we can follow.  That’s what Jesus calls us to do: follow Him. And to follow, we have to hit the road with Him, walking where He walks and going where He goes.

And Jesus is going all the way to Golgotha – not just to the Cross, but through it. That’s where we have to go, too, denying ourselves and taking up our own crosses with the willingness to lose our lives for the sake of the gospel (Mark 8.34-35).

That’s why Palm Sunday isn’t (or shouldn’t be) a stand alone observance. It’s only the beginning of something bigger, deeper, and more profound. It’s the beginning of a journey – the journey that will transform us into new creations in Christ. And we ain’t seen nothin’ yet.

So, as Jesus passes by in front of us, let’s not stand still, looking on proudly and snapping a picture or two.  Let’s join the parade. Let’s hit the road with Jesus. Let’s follow Him this Holy Week all the way  to the Cross, and even through the Cross. Because that is why Jesus rides into Jerusalem today: that we might share in His death, so that we might share in His divine, abundant, and eternal life.

Blessed is the King who comes in the name of the Lord. Peace in heaven, and glory in the highest heaven!