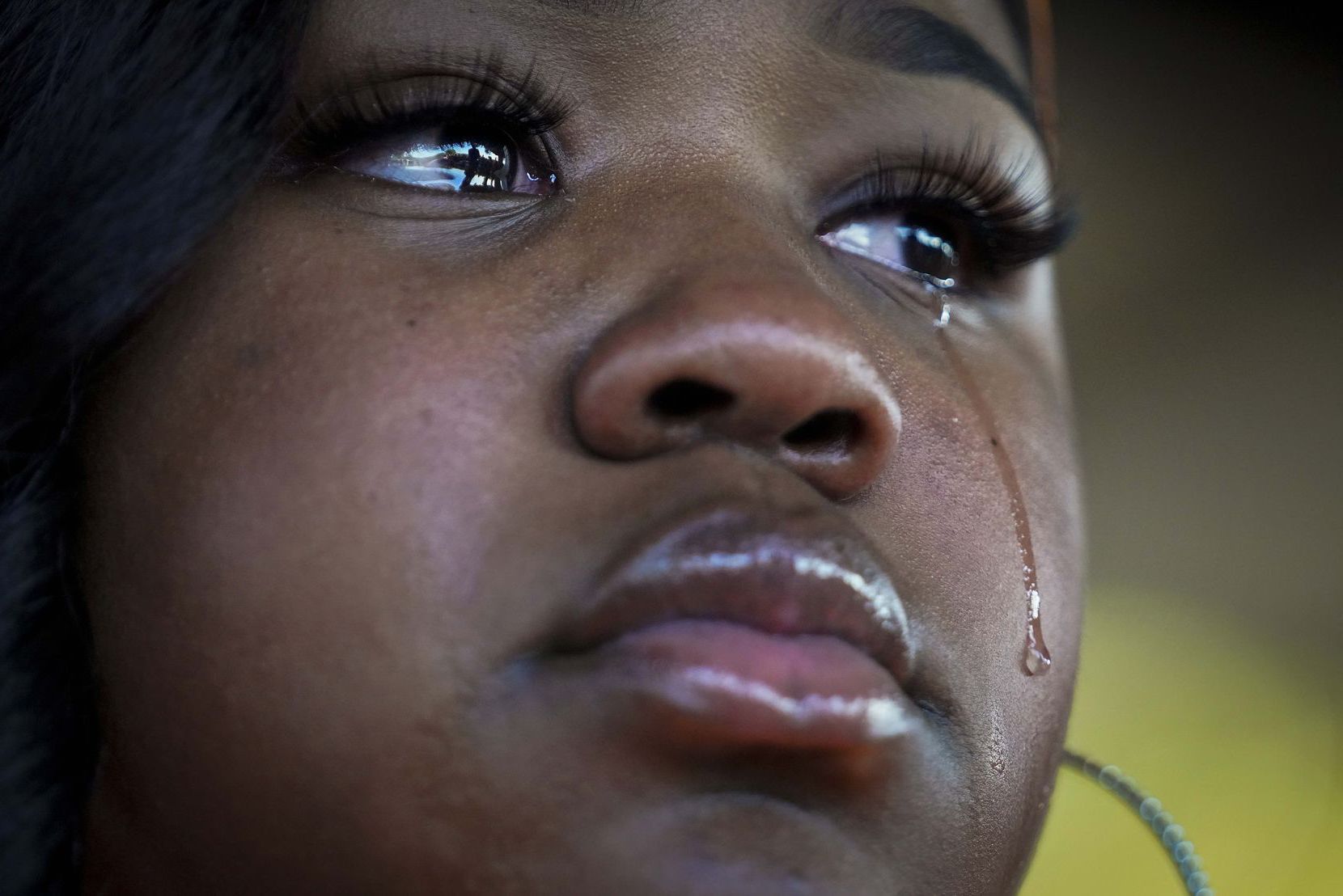 Some months ago, a friend referred me to an article in the July/August 2020 edition of Faith Today entitled “Listen to the Groans,” written by Carolyn Arends, a Canadian musician and author. The email simply said, “I think this article would make a good sermon on Romans 8:22-27.”  And so I hope it will prove to be.

It’s an article prompted by the cruel and sadly not so unusual police murder of George Floyd.  As the video of his killing circulated, Carolyn writes:

“I couldn’t stop thinking about his family forced to watch and, especially, listen to his dying. How they must be haunted by his groans. I began to pray that the Comforter would help George Floyd’s family bear the unbearable. I prayed that, eventually, they’ll be able to recall his voice in a form other than a groan – the sound of him singing, or laughing, or good naturedly trash talking a friend on the basketball court. And then I listened as a collective human groan for justice began to crescendo in America – sometimes peacefully, sometimes violently. And I realized this groan for things to be put right is as ancient as it is urgent. I remembered that here in Canada we have often ignored or suppressed similar groans for justice – especially from our Indigenous citizens. I could only stand to listen to the groans for a few days before I, like so many others, was tempted to despair.“

That’s when her thoughts turned to Romans 8 and a sermon she had heard some time ago from a pastor friend who was once jailed for his opposition to apartheid in South Africa.

There are three sets of groans in Romans 8:22-27, he preached.  (1) The external groans of a creation that is in need and longing for the flourishing of God.  (2) The internal groans of our own hearts – where, in our own grief we, like Mary Magdalene on Easter morning, so often encounter Jesus most palpably (3) The internal groans or sighs of the Holy Spirit whispering within us.  Whispering comfort. Groaning in solidarity with us, our heartache, and the burdens of the world.  groans of God’s are the deepest of all because no one longs to see us and all creation made whole more than God.

To which I say, “Amen.” And we could very well leave it there, but this article prompts me to think further – further about worship and attentiveness: where worship takes place, how worship takes place, and why.  Because I wonder if, too often, we understand and approach worship as some kind of escape.

A hundred years ago, J.R.R. Tolkien wrote an essay entitled, “On Faerie Stories,” in which he argues that the best fantasy stories, the best fairy tales actually help us to escape into reality – to rediscover the wonder of the world around us to which we are often (sadly) oblivious either because we find it too familiar or because we’re moving through it too quickly to really take notice.

“God finds our praises empty, distasteful, patently unacceptable even, when we gather for worship from lives that are complicit with oppression, that are tangibly unconcerned with the plight of the poor, that ignore or are willfully ignorant of matters of injustice.”

I find that a helpful insight to understanding what worship is all about when worship is at its best.  We’re fond of quoting Psalm 22:3 that “God is enthroned on the praises of God’s people.”  But more than one of the Hebrew prophets declare to us that God finds our praises empty, distasteful, patently unacceptable, even, when we gather for worship from lives that are complicit with oppression, that are tangibly unconcerned with the plight of the poor, that ignore or are willfully ignorant of matters of injustice.  (You can have a look at Amos chapter 5 and Micah chapter 6 if you want more specifics).  That tells me that our worship of God has to be connected – has to be – with the realities of the world. And that our worship of God should prompt us to enter back into those earthly realities with a heavenly orientation.

But is that really how we view and understand what we do on Sunday mornings?  To be reoriented and recalibrated?  To escape into the world, into the fullness of creation and our identity as human beings made in God’s image?  That is certainly a dimension of what Paul is urging us toward in Romans 8 – not an escape from the world, but a deeper engagement with it – engagement with God, with Christ, with each other, with ourselves.

That’s what the groans are about, and why the Apostle Paul urges us to listen to the groans – outside us as well as inside us.  In creation. In our hearts.  In our souls.  To the agony of the world.  To the prompting of the Spirit. That’s why Carolyn Arends’ pastor is right to identify three layers of listening that is involved.  But I would push us to see a fourth layer as well, or perhaps more accurately a fourth step in this process of active, holy listening to the world.  And that is: Once we listen, once we hear, we need to respond to what we hear.  Once we escape into reality through our worship of God, we need to return to the world with a renewed sense of wonder and responsibility and purpose.

“Once we listen, once we hear, we need to respond to what we hear.  Once we escape into reality through our worship of God, we need to return to the world with a renewed sense of wonder and responsibility and purpose.”

Because if we offer God worship that God finds pleasing in church, we will become agents of God’s justice in the world.  And well we should be – not only because we are worshippers of the God who inspired the prophets and became incarnate in Christ Jesus, but because many of the groans emanating from creation originate with us. Many of those groans are the result of bruises and scars and still gaping wounds we have inflicted.  Not just individually but collectively.  Not just recently but historically.

God may have created the world and God may rule over the world, but we have landscaped it.  The margins of this world are the result of lines we have drawn. The gutters of this world are the result of ditches we have dug – or had dug for us.  And so, if our hearts are truly contrite before the LORD, these groans we hear will not only break our hearts but convict us of their origins.  Conviction should then move us to repent. To do justice and love mercy, not just walk humbly. To act. Indeed, we cannot repent unless we act.  Repentance is making amends, not just saying sorry.

And so, take a moment. Listen. What groans do you hear?

I hear the groans of 215 dead Indigenous school children crying out from their mass grave in Kamloops – not just for themselves but for the hundreds and potentially thousands more whose residential school deaths have yet to be brought to light.

I hear the “deep groans and passionate yearnings”[1] of those who have too long had the content of their character judged by the color of their skin.

I hear the groans of our LGBTQ friends crying out from the condemnation and ostracism and violence they face – especially that which they face from the church.

I hear the groans of those whose feet are tired, whose bones are weary, whose spirits are stunted from working long and hard at jobs that demand much but pay little, those whose blue-collar labour is exploited to boost white collar perks and bonuses.

I hear the groans of melting ice caps and expanding deserts, of strip-mined mountains, of drowning coastlands.

I hear these groans – and I hear God groaning with them and for them.  And it does make my heart break.  Truth be told, at times it makes me want to wallow in anger and disillusionment. At other times, it makes me want to rise up and hit back.  But rarely does it make me despair.

And this is the place where Carolyn Arends and I both firmly land in reflecting on Romans 8:22-27. The groans of the world are hard to hear – and, if we are honest, that is why those of us who are privileged enough to have the choice so often choose not to hear, not to listen.  These groans reflect deep pain, deep suffering that makes us deeply uncomfortable. That should make us deeply uncomfortable.

And so, my brothers and sisters, let us listen to the groans – the external groans of the world around us, the internal groans of our hearts within us, and let us do so as an act of worship pleasing to God. Let us worship the LORD our God with our whole selves, and through that worship escape into the world to love our neighbours as ourselves.   And in that attentiveness, may we hear the Holy Spirit whispering words of comfort to us and to all who suffer; may we hear that same Spirit groaning in solidarity with us and with all who suffer. May we hear Jesus’ invitation to “Come, follow Me,” as an extension of that groaning: An invitation to have our deep hunger satisfied and our deep thirst quenched.  An invitation to belong. An invitation to live in solidarity with this groaning and hurting world as He is in solidarity with this groaning and hurting world.  An invitation to love as we are loved – to love not just in our thoughts and prayers but, “in truth and action.”[3]