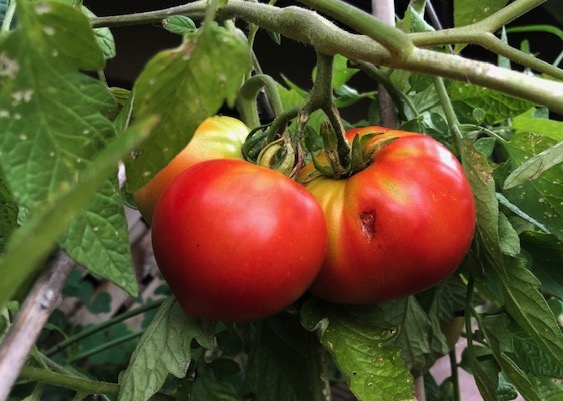 Our second summer in Canada, the girls and I attempted a small garden in our backyard. We began with cucumbers and beans planted directly in the soil along the fence, and a few tomato plants in large flower pots nearby. Having only gardened in the Mid-Atlantic and southern United States, Canada’s shorter growing season came as quite a shock. In August, just as our scrawny vines were starting to show some life, we left on a vacation to New Brunswick and left the cucumbers to their fate.

When we returned, a handful of tomatoes and one large zucchini that we christened “King ‘Cchini” were all we had to show for our labors. We had spent most of the summer toting tomato planters around the yard, chasing the illusive Canadian sun, to no avail. I’m afraid our vegetable garden, begun with much enthusiasm and good intention, was doomed from the start. We overestimated the amount of sunlight filtering through our shady yard and we underestimated the ravenous appetites of the chipmunks for our bean seedlings. We failed to take into account the needs of our new vegetable garden and our ability to meet them before we started planting.

There are lessons here for communities of faith seeking to navigate new cultural realities. One of the Christian Community Development Association training workshops that Todd attended in Chicago encouraged participants to define the boundaries of their church’s ministry by examining The Mission of the church, the Vision of the church, the church’s Resources, and the church’s Values. The speaker imagined these parameters as the boundaries of a ministry sandbox. If a church initiative or program meets all four criteria of Mission, Vision, Resources, and Values, then in the sandbox it goes. If the ministry doesn’t meet all four criteria, then the church is not ready for it. I prefer to think of this sandbox as a “ministry garden,” which carries with it the connotations of life, growth and nourishment.

When I worked at Cooperative Baptist Fellowship, we churned out reams of resources to help churches connect with their communities, global missions, and with God. Add to this stack the inventory of Christian bookstores, appeals from nonprofit charities, and every pastor’s Pinterest board and the opportunities are infinite. There are so many ministry programs that a church could do, but how to determine the ones a church should do?

When a church wants to undertake a new initiative or activity, those involved first need to ask if it is something that falls within the church’s unique mission, which can be summed up as, “Why we exist as a church.” I would hope the answer to this question would begin with God’s love and Christ’s Good News and ripple out from there, but often we are more concerned with providing comfort and continuity for our members than confronting the needs of a changing society. Is our existence based on gaining and maintaining status rather than upsetting the status quo? If the church disappeared entirely, would anyone outside its doors notice? Answering the question, “Why do we exist?” can be an opportunity for real soul searching in the church and a chance for the church to return to its first love as the writer of Revelation says to those in Ephesus (2:4).

“is our existence based on gaining and maintaining status rather than upsetting the status quo?”

The “who”, “what” and “where” of a church make up a church’s Vision. Again, these elements may seem obvious, but when was the last time your church took a good look at the neighborhood and its neighbors? Our former church in Hyattsville, Maryland was founded when the neighborhood was nothing more than a sleepy southern suburb of Washington D.C. The population was predominantly white and upper middle class and remained so even during the depression and civil rights era. When we arrived there in 2009, however, these historic demographics were undergoing a seismic shift. A church that for decades had been 70% white, was approaching a racial balance closer to 50-50.

This was an amazing transformation for a Baptist church, a great blessing to us, and certainly the work of the Holy Spirit, because the church did not actively seek this change. The church had not changed, but the community had indeed changed around it. Hyattsville had become 30% white, 30% black and 30% Hispanic in a relatively short span of time. A burgeoning art district and revitalized downtown were drawing diverse people to the community. A subsidized housing apartment building next door had been constructed on land donated by the church, and many of its tenants enjoyed the convenience of walking across the parking lot to attend church.

I cannot overstate how blessed we were by the loving, patient presence of our African American members, and what a spiritual debt I owe them. However, long time members felt differently. They refused to acknowledge that the community had changed and refused to take into account the preferences and experiences of our minority members who were well on their way to becoming the majority. It is not enough for a church to say that its mission is about God’s love. A church must actually show that love in the way it lives out its vision. To paraphrase the apostle Paul, when a church chooses comfort and prestige for itself over love of neighbor, that church is little more than a Gong Show (1 Corinthians 13).

“it is not enough for a church to say that its mission is about god’s love. a church must actually show that love in the way it lives out its vision.”

Another consideration when creating a new church program would be the resources required for it to function well. For anyone who has survived a church committee meeting, “resources” usually translate into “show me the money.” If there’s money in the budget, and things are going fairly harmoniously among the members, then the ministry usually proceeds without a second thought. However, a second, third and even fourth thought ought to be given before anyone starts signing checks. Too often churches want to skip over the mission and vision steps and go right to the dollar amounts. They reason that, surely if it seems like a good idea, then it must be ordained by God and if the church has the money in the budget, we should do it.

Often these good ideas are voiced by the loudest or most influential voices in the room, and escape the critical scrutiny that all proposals deserve if we are to be good stewards. Asking if a new project aligns with a church’s mission and vision, helps distinguish the should from the could.

Before we came to Alexandria, Virginia the church that Todd pastored there had spent $40,000 on a deluxe playground for its preschool. The preschool director was a popular and dynamic woman with a passion for children. Everyone loved her, we loved her too, and a new playground was perhaps something the preschool was indeed in need of. However, I would question if spending such a substantial amount on this particular playground reflected the church’s mission and vision of reaching out to the community. The trustees at the church were afraid that the neighborhood children would somehow “mess it up, ” and so the playground was limited only to the children attending the preschool. We attempted to change this decision, to no effect. Instead of the church appearing welcoming to children and young families, it came across as stingy and stuck up. Here was this beautiful playground shimmering on the street corner like the Emerald City in the Wizard of Oz, and the children of the neighborhood weren’t allowed to play on it.

Two additional resources that need to be considered when looking at the “how” a ministry will be conducted are time and availability of volunteers. For generations churches ran on the unacknowledged work of women. I remembering asking my mother what she thought about women in ministry back when that was a new and controversial idea. She said, “women are already doing most of the work in churches, it’s about time they got credit for it.” With both partners in a relationship working (whatever their sexual orientation) fewer and fewer church members are available to devote their time to staffing new programs. An after school tutoring program, no matter how noble, is not going to work for a church whose members have to commute during rush hour to staff it. A food pantry, no matter how needed, will close if volunteers are unavailable to distribute the food. Legacy ministries may need to be re-examined to suit the changing availability of members, and new initiatives need to be honest about the time requirements and number of volunteers needed to conduct that initiative successfully. A program organized by overextended volunteers cannot be effective.

The final parameter for a church’s ministry garden, is the set of Values held by the church. Those values could include, love, justice, equality, etc. Northside Drive Baptist Church in the Buckhead neighborhood in Atlanta determined that what it valued most was the worship of God. After a discernment process, the members dedicated themselves to high quality, liturgical worship. When I attended Northside Drive, the choir conductor at the church was also the choral conductor for the Atlanta Symphony and there were many fine soloists brought into the church. The worship service was created with thought and intentionality from the Call to Worship to the organ postlude that ushered congregants out of the church. Their memorable multi-lingual choral reading of Acts 2 for Pentecost, is something that we have continued to include at the churches Todd has pastored.

In the end, we gave up on a vegetable garden. Since Toronto is a turn around spot for migrating monarch butterflies, we transformed our vegetable garden into a pollinator garden. It’s been much more successful at feeding butterflies than it ever was at feeding our family. The garden is beautiful year round, low maintenance and it inspired Emma to start a Butterfly and Moth Rescue Club at her elementary school.

In Part 2 of this Ministry Garden series, I’ll look at those elements that compose the metaphorical “mulch” necessary for establishing and maintaining a successful church ministry.