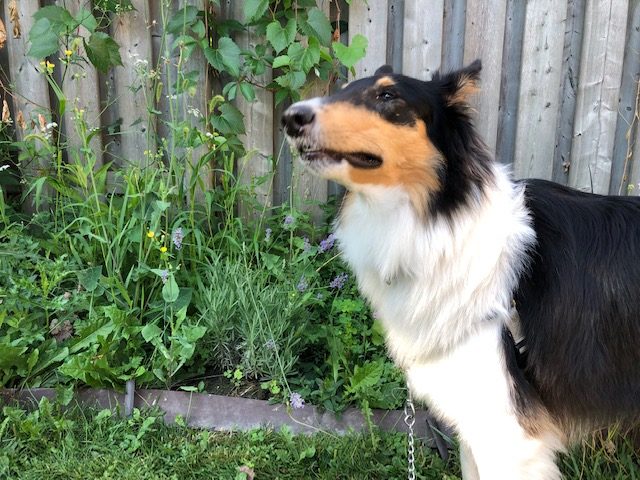 My vernal detector is still set on “Virginia” and, despite four years in Canada, when the calendar flips to April, I am ready for warm breezes and sunshine. April Fools! It’s usually another two months before Toronto’s spring arrives in any recognizable form. Those two months are the longest of the year. Longer and more miserable even than Canadian winters, which are growing on me unlike “spring” which is literally growing nothing. A roulette wheel of freezing rain and freezing snow leaves the ground freezing mud and impervious to planting. But just as soon as whatever passes for spring has sprung in Toronto, I’m in the garden.

I’m pulling weeds and prepping flowerbeds, digging holes and dividing bulbs. And when I’ve got everything the way I want it, I tell Todd that I need him to pick up some mulch to keep it that way. Invariably life happens, mulch doesn’t happen, and my beautifully weeded flower beds become overgrown again. Turns out all that nicely turned soil not only grows flowers, it also works for weeds.

It would be tempting to blame Todd for my predicament—if only he had just bought the mulch when I asked!—but, if I’m being honest, I know that I’m really the one at fault. I am an overeducated, over forty, feminist, and I could certainly go to my local garden center and buy some darn mulch! Even better, I could have bags of mulch at the ready before my enthusiasm for weeding runs away with me. The same holds true for church initiatives.

Like gardening, church initiatives start with the best intentions. Perhaps it’s a need for more prayer, or a desire to pray more creatively; a featured mission opportunity or small group Bible study. All good things with transformative potential, but all things that I have seen fall by the wayside and fail in the local church. Often the fault lays not in the idea, but in its execution, evaluation and exit strategy. These are the “mulch” of planning that, while not as exciting as dreaming up a new church ministry, are key to its success.

It’s easy to be swept away by enthusiasm for a new ministry; nothing feels better than being at work with God on a new project, but before creating the to do list, there are a few more “mulch matters” to consider. Nothing is worse, than kicking off a new mission and watching it fall flat . At the very beginning of a new initiative, before anyone orders pamphlets or heads to the hardware store, it’s worth asking a few questions and doing a little digging. Primarily, “What needs to be done to maintain this ministry?” There is a faulty assumption among churches that a good ministry initiative will be self-sustaining. Make it available and the Holy Spirit will do the rest. This is lazy practice and lazy theology. Those leading the project need to decide who will change out the prayer room theme, or update the website and how often? A hallway of decomposing bulletin boards or a collection bin of undelivered canned goods does not inspire participation.

Focusing on the follow through can lead to a revision of the ministry itself. At our first church in Virginia, a high school student wanted to create a prayer room in the church as his Eagle Scout project. At first glance, this appeared to be a worthwhile undertaking. What church wouldn’t want a spiffed up prayer room? But before he gave the go ahead Todd considered what the follow through would look like. Our church didn’t have many Sunday School rooms or much storage space, and the room in question was already functioning as both. If the room were to remain usable class space on Sunday mornings, then there actually wouldn’t be much time to use it as a prayer room. Where would we store the file cabinets of choir music? Who would maintain the space when the Eagle Scout went away to college? And was there really a clamor for a prayer room? At the time, the church didn’t have a dedicated group meeting to pray, so would the room really be used that often to justify taking it out of circulation?

In the end, Todd worked with the teen to transform his idea for a prayer room into a prayer garden. It was a much better fit for what the church could accommodate, and even better, advanced the church’s goal to be more present in the community since the prayer garden was open to the public. The creation of the garden also became a congregation wide project as members donated money, labor, and plants to the cause. We dedicated the finished garden one Sunday after church, and it became a nice reminder of what the church could do together.

In another garden, my parents’ neighbor once grew an abundant crop of zucchini without ever having tasted one. To her, it seemed like something that she should have growing in her garden, even if she had no idea how what to do with a ripe zucchini. The neighbor gave my mother an armful of zucchini and in exchange my mother baked her a loaf of zucchini bread and included a recipe card. Once she learned the wonders that could be wrought with a zucchini, the neighbor kept the rest for herself. Just because members know they should pray, doesn’t mean they know how to interact with a church prayer room. Church members come from a various backgrounds carrying various church baggage. So construction of a new church program should always include the question, “How will we communicate, educate, and motivate the congregation to take part in this ministry,” in the blueprints.

“Construction of a new church program should always include the question, “How will we communicate, educate, and motivate the congregation to take part in this ministry,”

If your ministry team is made up of long time church goers, it’s easy to make the mistake of assuming that everyone in the congregation is familiar with church staples like prayer, Bible study, missions, or practices that are specific to your church such as when and how the Christmas offering is collected. Keep in mind that since dedicated church attendance is now once or twice a month, this information will need to be disseminated more often than in the past. If your team is sick of hearing about it, the message is probably just starting to filter down to the congregation.

I’ve been in church meetings after a low turn out event and heard members intone that “if we reached only one person, it was worth it.” I’ll set aside the iffy theology of the individual behind this idea, and say more practically that, “if we reached only one person, it was a waste.” Churches need to be good stewards of their members’ time, money, and spiritual engagement. All of these are limited resources, and growing ever more limited in an overly busy world. We expect business, charities, and schools to be accountable and we should expect no less of our selves. So it’s important to have a metric in place at the start to evaluate a new ministry. How many attendees at a new Bible study would be enough to warrant the time commitment and space requirement of the study? What would determine the effectiveness of a new prayer station in the sanctuary? Could those who use the prayer room sign in, even if it’s with an anonymous rubber stamp, to keep a tally of visitors?

How often these evaluations will take place is just as important . Monthly? Quarterly? After a liturgical season? It’s important to build the schedule for these check-ups in at the beginning, before a new ministry is even announced to the congregation, so that everyone involved stays engaged and accountable. I have seen enthusiastic members launch a new project only to move on to something else before the first one even takes hold in the church. This increases the likelihood that both will soon wither.

There is nothing wrong with ending a church ministry. Like my failed vegetable garden which was transformed into a butterfly garden, ending a ministry frees up resources for a project that might be a better fit or more meaningful in the long run. The Holy Spirit is always moving and always doing something new. Change should be a part of the church’s DNA. One way to build in potential success from the beginning, is to design ministry opportunities of limited duration. Bible study groups with definite end dates or prayer meetings confined to Wednesdays in Lent are a great way to try something new. Short term projects also draw more participants. Our current church choir performs only during the Christmas and Easter seasons, but has a robust membership that it might not have if those involved were required to dedicate every Thursday of the year to rehearsals and sing each Sunday.

Every church has the story of some member who volunteered for a committee and ended up chairing it for twenty years, and no one wants to be that member. Term limits for church projects ensure that as membership roles and time commitments change, congregants can schedule their involvement accordingly. Limited sessions or seasons of ministry also allow for broader and more diverse participation. Not only are volunteers given an easy way out when the session is through, but minority voices and the views of outsiders in the church are given an easy way in.

Extra preparation on the front end results in a better outcome when creating a new church program. Not just in terms of a productive ministry, but also in the sense of purpose and well being in the church. Successive perceived failures are a drain on church moral. With attention to execution, evaluation, and with the inclusion of an exit strategy, a new ministry has a better chance of blossoming into an agent of transformation in the local church.

Part 1 of this series, “Ministry Garden: Setting Ministry Priorities for your Church,” can be found here.