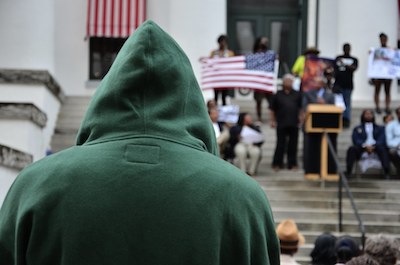 Do not be conformed to this world, but be transformed by the renewing of your minds, so that you may discern what is the will of God: what is good and acceptable and perfect.  – Romans 12.2

The tears rolled down and the cries went up almost immediately.  Less than twelve hours after the verdict, demonstrations were taking place, revolution was called for, and the Justice Department received a petition to bring civil charges.  Forty-eight hours after the verdict, some of the demonstrations are turning violent, the Justice Department says civil charges will be “difficult” [1], and revolution now seems unlikely. Of the three, I think revolution is the only viable option, really – but not the kind of revolution advocated in the street.

I read about the George Zimmermann verdict Sunday night just before going to bed.  I turned out the light and laid a conflicted head upon my pillow.

I did not follow the trial in any detail – just the odd online recap here and there and a few minutes of live testimony I saw one day while standing in line at my bank.   I may very well have missed something important, but from the analyses I’ve read and the evidence I’ve seen (as presented), no other verdict really seemed possible.  A reasonable doubt is all the defense had to raise.  Couple the prosecution’s burden of proof with Florida’s generous latitudes for self-defense (widely known as “Stand Your Ground”), and the State Attorney’s office simply did not make a case that warranted conviction under the law.  From my admittedly limited vantage point, it seems the jury did the only thing they could do given the legal parameters within which they had to operate – and we should all be thankful for those parameters.  We should all be thankful that the prosecution has to prove its case beyond a reasonable doubt.  It’s what any of us would want for ourselves if we were on trial.

Yet, I am nevertheless disappointed and disillusioned.  The standards of American jurisprudence are in place to ensure a fair trial, but they have never insured against miscarriages of justice – and it is hard to see how justice is anything but stillborn here.  Something horrific happened in the Twin Lakes neighborhood of Sanford, Florida, on February 26, 2012, for which this trial has yielded nothing in the way of closure or satisfaction – for Treyvon’s family or for our nation.

An African-American member of my church lamented the verdict as “a step back” Sunday in a prayer voiced during worship.  A step back. The pain in her prayer pulsated with history.  But how far back do we really have to go?  How far forward have we really come?

It’s been 50 years since Dr. King led the March on Washington. “I Have a Dream” is as much a part of the American conscience as the Declaration of Independence and the Preamble to the Constitution.   Even still, in 2013 not only is a crime committed against an African-American still less likely to end in conviction, a crime committed by an African-American is also more likely to end in conviction [2] – especially when the accused is a black male.  Black men of 21st century America are six times more likely to be incarcerated than white men – and that’s after a significant decrease in the incarceration rates for blacks in the last decade [3].  More than a few pundits and bloggers have pointed out that a black Florida woman was recently sentenced to 20 years for firing a warning shot at her abusive husband.  “Stand Your Ground” somehow did not apply to her, the court said [4].

The entire episode – the confrontation, the shooting, the investigation, the trial, the public outcry – is heartbreaking.  But I believe much of the disappointment and disillusionment of these past two days stems from the fact that we, as a nation, are looking to our legal system to do something it cannot do.  The Emancipation Proclamation freed the slaves legally 1865, but it didn’t free them socially or culturally. A century later, the Civil Rights Act of 1964 finally tore down the fortresses of that enduring social and cultural slavery (segregation and other forms of legalized discrimination), but it did not dismantle the bunkers dug wide and deep underneath. That’s because the foundations of prejudice, bigotry, and fear reside not in statutes or legal precedents but in our hearts and our minds – and that is where they must be demolished.

“the foundations of prejudice, bigotry, and fear reside not in statutes or legal precedents but in our hearts and our minds – and that is where they must be demolished”

If the jury had returned a different verdict, we might feel better but it would not have answered the lingering questions surrounding the shooting or changed the events of that fateful night.  And I don’t think locking up George Zimmerman would likely prevent such tragedies from happening in the future – any more than capital punishment has curbed the incidence of homicide.

Sadly, the tragedy of Trayvon Martin did not end on July 3, 2013. But neither did it begin on February 26, 2012.  I would argue that the ripple that became the wave of Trayvon’s tragedy began all the way back in the formative years of our country, in the politics of post-colonial America, as our Founding Fathers gave shape to a new government for a new nation.

As you no doubt remember from US History 101, a dispute erupted between slave-holding and non-slave-holding states over how to account for slaves when determining the population of a state. Since population would determine the number of representatives a state could send to the House of Representatives, slave states wanted slaves counted and non-slave state did not want them counted.  To resolve this dispute, the Founders struck the “Three-Fifths Compromise.”  A slave would be counted as 3/5 of a person when determining a state’s population.

Blacks in America have been struggling to be counted fully as people ever since. We are still haunted by the specter of the Three-Fifths Compromise, and the fatal assault on Treyvon Martin is its latest poltergeist.

Even after a Civil War, even after Civil Rights, even after the election of an African-American to the White House – the most exclusive residence in our land – it is still possible in these United States for an unarmed 17-year-old black male to be shot and killed inside a gated community because he wasn’t “supposed” to be there.

May the revolution begin, at last. The tears and the cries have lingered far too long.

Call to Worship: In Celebration of Diversity

Call to Worship: “Lord Christ, teach us to live as You...