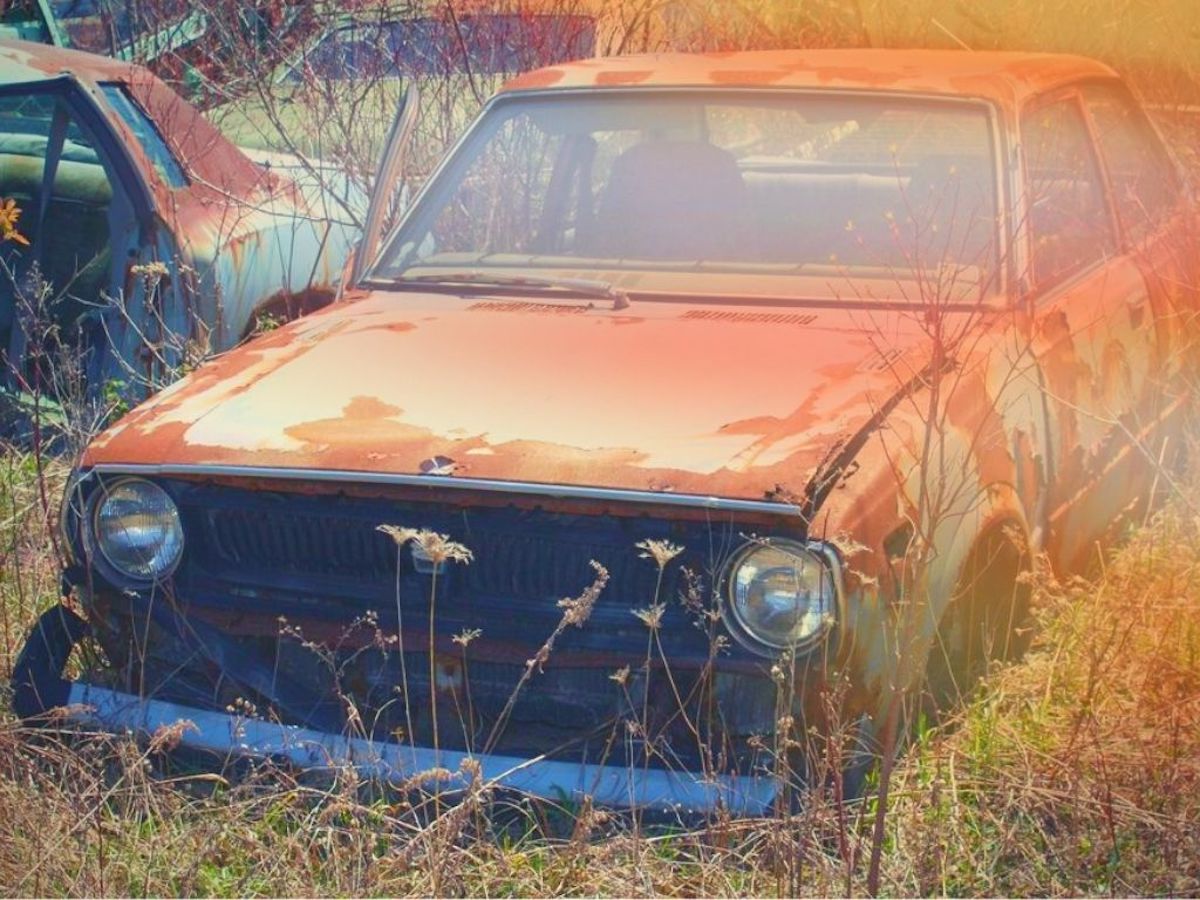 Circa 1984, our family was in possession of the world’s greatest car, a 1970 mustard yellow, two door Toyota Corolla that we christened “Chug-a-Boom.” My father purchased this pinnacle of automotive excellence for $800 from a beach bum who lived on Lookout (!) Road near the Virginia Beach oceanfront. That the car broke down turning out of the neighborhood was probably a harbinger of things to come, but from my perspective, the seller had no idea the gem he let slip through his fingers.

Every outing with Chug-A-Boom was a guaranteed adventure. Because of those early beach years, whenever the car made a sharp turn, sand rattled through its rusty metal frame like pebbles through a rain stick. Black vinyl seats made summers extra sticky. And who needed air conditioning when you had a hole by the gear shift that not only allowed for the flow of air, but also provided an entertaining view of the road speeding by underneath. Despite these ‘flaws,” or in my eyes because of them, Chug-a-Boom was the car of choice among my friends for trips to the mall, the pool, and the skating rink. When my younger brother, Nate, was with us, our imaginations would transform Chug-a-Boom into everything from a tank to a submarine, or a race car to an airplane.

My father’s car was also a favorite in the automotive class at the high school where he taught. Its make and model made the engine easily accessible for the novice mechanics, who, over time, replaced the starter, the breaks, the spark plugs, and the clutch in our old Toyota. When Chug-a-Boom’s muffler fell off on our way home from piano lessons, we simply threw it in the trunk and added it to the list of repairs for the students in the fourth bell auto-shop class. We joked that the bumper stickers were the only thing holding that car together.

Eventually Chug-a-Boom’s troubles grew too complicated for the auto shop students. To prevent the old Toyota’s engine from dying, my father made a game out of inching through red lights without ever stopping. Chug-a-Boom’s annual inspection grew into a quest to find someone who might take pity on our old car and not look too closely. And with the shift to unleaded gasoline, only the Sunoco station still sold the leaded gasoline necessary to fuel Chug-a-Boom’s adventures. Parts for a 1970 Toyota Corolla were becoming harder to find in the junkyards around Virginia Beach.  Even the one down by the old Ford plant in Norfolk came up empty. There was also the very real possibility that any parts we did replace under the hood might actually end up in the middle of the street once Chug-a-Boom’s corroded frame finally gave way.

So there she sat by the curb in front of our house, out of gas and out of luck. My brother and I lobbied to move the car to the backyard and enshrine her as a jungle gym. Not even the suggestion of converting parts of the Toyota into a planter could sell our mother on this idea, which was just as well since there was no getting the car through the back gate anyhow. While we delayed and debated what to do with the world’s greatest car, our neighbors called the city and complained, forcing my father to have Chug-a-Boom towed away.  It was a very sad day.

I’ve been experiencing a lot of sad days lately, along with many others who have always considered themselves part of the church and found that identity and that place meaningful. Beth Moore, whose ministry has done so much for so many women, finally had enough with the way the Southern Baptist Convention treats women and left that denomination. The Vatican slammed shut the door to LGBTQ acceptance Pope Francis had opened in the Catholic church–an act that has done nothing but drive younger and more progressive parishioners away. The same is true for thousands of former evangelicals who have walked away from church altogether, disillusioned with Trumpism’s racist, sexist, and homophobic agenda. A recent Gallup poll showing church membership dipping below 50% in the US for the first time.

My own exodus from church has been a painful process, one full of anger, grief, confusion, and resentment, because, like my memories of that old Toyota, I have many, many fond memories of church.  I grew up in a church that loved and supported me and was there for my family through all the years of my brother’s terminal illness. Even at a young age I felt called to ministry of some kind, and once Todd was ordained we both thought our lives would be spent serving the local church and making a difference in our community through the church.

And yet in these fifteen years of ministry much of our time and attention has been devoted to mediating disputes and fending off attacks from within the church. Every church Todd has pastored has been one reeling from a past crisis and has required extensive emotional and systemic repair- and spare parts for churches are hard to find! The culture has changed, in some cases the communities around the churches have changed, and the volunteer force that used to keep these churches running is no longer available. Women have entered the workforce and retirees are working longer, raising grandkids, and spending their retirement years on better things than church business meetings.

If this seems like an outdated model for an organization, you’re right! Which is why I have found myself under the hood so to speak, doing everything from teaching children, youth, and adult Bible studies, to leading the music, organizing the missions projects and arranging the flowers on the altar. I love doing these things, I truly do. Yet, just as often, I find myself with Todd behind the bumper attempting to push an institution up a hill with the breaks still engaged.  Because, while there’s usually within churches a vague sense that something new needs to happen, the unspoken dictum is “don’t change things, at least not by too much, and don’t touch anything we like.”

“there’s usually within churches a vague sense that something new needs to happen, the unspoken dictum is ‘don’t change things, at least not by too much, and don’t touch anything we like.’”

I’ve reached the conclusion that one of the reasons I, and others, are disappointed and dissatisfied with the church is that we have been asking the institutional church to do something it is incapable of doing. The church needs a major overhaul, but the parts, the fuel, the will to get dirty tinkering around under the hood simply are not there. And, to make it worse, no matter how sentimental we are, or how many fond memories we treasure, the neighbors only see an outdated, broken-down pile of junk.

So what to do? Todd and I have a calling, and the body of Christ has a calling to love God with our whole selves and to love our neighbors as ourselves. And yet the institutional church not only seems incapable of doing this, but also unwilling. Let’s face it. If churches really wanted to love their surrounding communities in profound ways, they would be doing it already. There are plenty of organizational resources, sermons, and the Holy Spirit to provide the why and the how if churches had the will.

I think getting to the place God envisions for believers will require an entirely different vehicle. Worn down by infighting, political ambition, and bigotry, the corroded frame of the church as we know it cannot support the arduous work of love and justice that God desires. Rather than prop up defunct and dysfunctional systems, we should seek new ways to worship and serve that are outwardly focused and inspired. Perhaps something we don’t even call “church” anymore, but that reflects the best of our memories of that place without making an idol of it.

The love, joy, and community that my brother and I and our friends felt in my father’s old Toyota are qualities I have tried to bring with me into my own two door hatchback as I haul around my daughters and their friends. We still laugh about the time we were able to cram two girls and a tuba into its tiny interior. Chug-A-Boom may be long gone, but the lessons I learned about generosity and optimism remained. If Christians hope to have any future as the loving hands and feet of Jesus in the world, we’re going to have to leave the church as we know it in the past.

Worship in the Wilderness