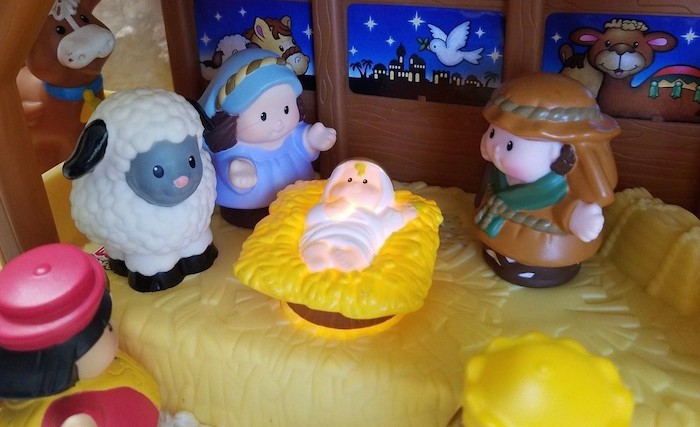 I was wrapping up my work-from-home day a few weeks ago when my three-year-old daughters wandered into the bedroom and piled onto the loveseat where I was studying. They started leafing through my Bibles, sifting through every piece of paper within arm’s reach, and asking questions about everything in sight. I did my frantic best to engage their interest in what I was doing while trying to maintain my train of thought and prevent what was quickly becoming a landslide of my labor. Just as I began to get myself and my things together, Emmy abruptly halted her scrutiny to complain that the current song playing on my laptop (Jesus Christ the Apple Tree) was too slow. I set my stuff aside and scrolled through my iTunes library to find something more upbeat for her, hoping that would appease her long enough for me to get my books and papers put away. I congratulated myself as she started to grove to “You Can Call Me Al.” Then Mary spied my Anglican prayer beads on the side table. “Beads!” she exclaimed, with a zeal that forecast a tantrum of even greater force if Daddy did not indulge her curiosity.

“Now be careful,” I said, as I placed them in her outstretched hand. “These are special beads.” She studied them with her fingers and gazed at them intently.

As they sat on my lap and we listened to the music, Mary slowly pulled the prayer beads over the arm of the loveseat and across her own lap. “It’s a snake,” she giggled. I laughed softly, thankful that her imagination had taken her to an animal that glided gently over things. I watched her with fascination for a few moments until I managed to wiggle a hand free and turn my attention back to my laptop. Before long, I found myself trapped under a pile of snoozing toddlers. The invasion was over and the occupation had begun.

With my wife at the store, I settled in for what might be a lengthy (and wonderful) stint as a human mattress. Before I got too comfortable, though, I lifted the prayer beads from Mary’s relaxed grip, fearing they might vanish into the mysterious depths of the sofa cushions, and returned them reverently, if awkwardly, to the table. In the process, I thought again about how easily those beads had become a snake in her hands. Then I wondered if that was the real reason why I should handle them with care. Such metamorphoses are hardly confined to the innocent and playful workings of a child’s mind.

All of us who call ourselves disciples of Christ would do well to remember that faith can slither as well as soar, especially as we round the final bend of Advent and see Bethlehem coming clearly into view. The coming of Christ into the world is the most special of God’s good gifts. It stands alone as an act of love and grace. But one thing Christmas has in common with all the rest of God’s good gifts is that the babe lying in the manger can be misused in human hands: can be, has been, and will be. It’s a story as old as Eden: God provides for humankind and humankind exploits God’s provision for their own purposes rather than God’s, thinking we can better provide for ourselves. The serpent who tempted Eve is alive and well, and it still has our ear, coaxing us down ever closer to the ground and away from the heights of heaven we could be climbing. And the true genius of the serpent’s guile is that he has found ways to make us think we are soaring on the wings of eagles when, in fact, we are sliding on our bellies.

“But one thing Christmas has in common with all the rest of God’s good gifts is that the babe lying in the manger can be misused in human hands: can be, has been, and will be. It’s a story as old as Eden: God provides for humankind and humankind exploits God’s provision for their own purposes rather than God’s, thinking we can better provide for ourselves.”

The train of thought I was trying to hold onto during my daughter’s initial onslaught was for a sermon on Acts 6-8, which tells the story of Saint Stephen. He, like the Twelve Apostles, was filled with the Holy Spirit in the days following Pentecost. They all proclaimed Jesus as The Righteous One, the long-awaited Messiah. They taught. They healed. They performed miracles. They did all the things Jesus did in His earthly ministry (John 14.12), and just like Him they rankled the establishment. God was on the move and God was moving God’s people—again—just as God had in the days of Abraham and Moses and Joshua, expanding both the depth of His relationship with humanity and the breadth of God’s Kingdom. But the people didn’t want to hear it. They certainly didn’t want to hear about how they were ignoring God’s movement, if not actively opposing it, just as their ancestors had done long ago. Stephen’s words make them so angry that they grind their teeth and stone him to death. They think they are defending the faith; in reality they are deliberately covering their ears, refusing to listen to what God is trying to say and stooping to the lowest possible means to preserve what they think belongs to them.

Sadly, Christian history is replete with similar stories—stories about the people of Jesus following the crowd’s lead rather than Stephen’s example, and for the same reasons. The Crusades, the Inquisition, Jim Crow Evangelicalism, Deutsche Christen, even Country Club Christianity all derive from the fact that we like our faith the way we like it. But our God is a God who refuses to be beholden to our preferences. God is a God who does new things because God is a God who shines light into darkness, and God is a God who pushes boundaries, challenges assumptions, and defies conventions because it is around the walls of such earthly institutions that shadows tend to fall. Often these walls go up in the first place because the serpent charms us with his designs. “God did something big, powerful, and truly amazing here—once,” the serpent says to us. “Let’s build a grand monument to it. We’ll be able to see it better when we can go inside, close the door, and get out of this glare. We’ll be safe there…from attack and, if need be, for attack.”

Stephen stands tall as an exemplar of Christian faith because he was open to God, not closed down: open to the new workings of the Spirit, open to allowing God to confront him, open to confronting others in Jesus’ name, and open to practicing grace as well as claiming it. He was willing to wade into the shadows and be a beacon of God’s presence there. To be “caught up” in the Spirit is apt language to describe what happens when the Spirit gets a hold on us, as it got a hold of Stephen: it lifts us off the ground and over the walls of our own building.

Many of those who will not be with us around the manger this Christmas will not be there because the last time they tried to draw near to Christ, someone threw a stone at them. For this reason, we who pilgrimage to Bethlehem this Christmas must be mindful of what lies in the shadows of the stable. One of the things Jesus is coming to do is to expose the underbelly of serpentine religion—wherever it lurks: in the hearts of spiritual authorities, like Caiaphas, when they make idols out of doctrines and power structures (Matthew 26.59-66); and in the hearts of disciples, like Peter, when they define Jesus’ Messiahship on their own terms rather than heaven’s (Mark 8.29-33). Some of those shadows around the manger most certainly belong to us. Are we willing to make acknowledging and facing those shadows part of our pilgrimage? We should. We need to. Christ is coming to call all of us—all of us—to repentance, so that He might then baptize us with the fire of heaven’s light and send the shadows running. The serpent can’t harm us when it has no place to hide.

My daughter Mary, who fittingly shares the name of Jesus’ mother, taught me a powerful lesson that day. She reminded me that Jesus is truly special. We should make our way to Bethlehem with haste and without reservation to rejoice with the shepherds and sing with the angels. We should cry out with zeal when we see Him, and gaze at Him intently. We should revel in the great gift God has given us. But we should also make sure we handle Him with reverence and care, like we would handle any baby: concerned more for what He needs from us than for what we need from Him. What we need from Him is taken care of. He is with us.