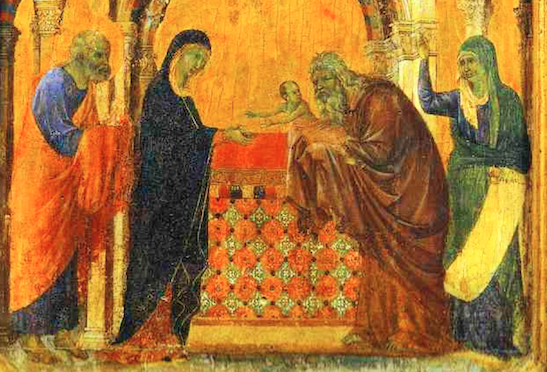 I’ve been reading about Candlemas this past week: the celebration of Christ’s presentation in the Temple forty days after His birth. I’ve read the story from Luke 2.22-40 many times.  What I did not realize is that this Gospel scene  forms the backdrop for a major feast (historically, at least) and one that still marks the end of Epiphany and even Christmas in some Christian traditions.

In Baptist life, we left Christmas behind weeks ago when we said farewell to the Magi and watched them “return home by another route.” As someone whose gaze always lingers on the horizon long after the Magi have vanished from sight, I find the idea that Christmas could technically continue on attractive. It also makes Scriptural sense.  The oracle of Simeon is the last in a string of prophesies and declarations about the Baby Jesus that we always recount during Advent and Christmas: the Annunciation, the Magnificat, and the choir of angels in Luke; Joseph’s dream and the coming of the Magi in Matthew.  Yet, Simeon somehow gets left out of Christmas as we know it, as if he were a footnote or a manuscript variant, even though his place in Luke’s narrative is pivotal. His words reflect and reinforce much of what has already been said about the newborn Christ; but they also describe Him in ways that are unique to his God-given vision. Without Simeon, we miss something about Jesus that leaves us ill-prepared to understand who He truly is and what His coming into the world truly means.

Master, now you are dismissing your servant in peace, according to your word; for my eyes have seen your salvation, which you have prepared in the presence of all peoples, a light for revelation to the Gentiles and for glory to your people Israel.” And the child’s father and mother were amazed at what was being said about him. Then Simeon blessed them and said to his mother Mary, “This child is destined for the falling and the rising of many in Israel, and to be a sign that will be opposed so that the inner thoughts of many will be revealed—and a sword will pierce your own soul too (Luke 2.29-35)

“In order to be light for one and glory to the other, He will of necessity challenge the assumptions and convictions of both groups, and both groups will oppose Him.”

The bit  about “a sword will pierce your own soul, too” is especially important.  Simeon’s prophecy will not submit to any of the purely populist interpretations often inflicted upon the Magnificat: up with the poor and the meek, down with the rich and the proud. Simeon puts Mary’s song in a broader and deeper context. Jesus is not just for Israel.  He is for the nations, too.  In order to be light for one and glory to the other, He will of necessity challenge the assumptions and convictions of both groups, and both groups will oppose Him.  He will even challenge you, Mary, his mother.  Even your soul will be pierced.

To better understand the implications of Simeon’s encounter with Holy Family, I’ve returned again and again to this anonymous medieval icon depicting the event of Jesus’ presentation in the Temple. I stumbled upon it by accident during my Candlemas investigations, and it has captivated my mind ever since. Like the story itself in much of contemporary Christian life, the picture is worn and faded, but when examined closely it radiates meaning.

Joseph and Mary stand to the left. Simeon and Anna are on the right. Behind them soars the grand architecture of the Temple (as the artist imagines it). Jesus is in the middle—though He is strangely inconspicuous in Simeon’s arms.  His swaddling so closely matches Simeon’s attire that only His head and arms are clearly visible. It almost appears as if Baby Jesus is wrapped fully and firmly in the folds of Simeon’s own garment: the folds of Israel, the folds of God’s promises.

Anna holds a scroll: the mark of a prophetess. Whether it’s writing is worn away or the surface intentionally left blank we can only guess. (It would be odd for an iconographic scroll to be left blank, but Luke does not actually record any of Anna’s words). She is pointing heavenward, however, in the direction of her life-long daily prayers: towards God.  The vertical lines and pattens of the architecture move our eyes in that direction as well, when we can pull them away from Jesus.  All eyes in the painting are on Him.  The combination of Anna’s Christ-focused gaze and her heavenly-directed arm suggest that when we see Jesus, we see heaven.

What I find most remarkable is that, at the convergence of it all, Baby Jesus is looking at Simeon but reaching for Mary.  In fact, the center of the painting is not the infant Christ Himself but the space between His hands and Mary’s.  The expression on His face (to my eyes) is somewhat apprehensive, like any infant in the arms of a stranger. But He meets Simeon’s gaze with an intent look of His own.   Simeon peers at Him with amazement and gratitude, and with a hint of curiosity.  Can this really be the Messiah?  He has come to me, as God promised, but He has come for so much more than me. Jesus’ reach pulls Him beyond Simeon more than away from him.  He is still wrapped in Simeon’s arms though they both know He cannot remain there.  His future, the world’s future, lies elsewhere.

And this is where the painting grips me in such a way that it allows the words of Simeon’s prophecy to pierce my soul.   In the background of this remarkable scene, where Jesus is reaching away from Simeon and all he represents, and toward his mother and all she represents, the Temple reflects the color of Mary and Joseph’s garb while Simeon and Anna reflect the form of the building itself.  The artist has dressed both Mary and Joseph in shades of Mary’s familiar dual color scheme: vibrant red and royal blue, the iconic colors of heaven and earth.   Above them and behind them, the ceiling vaults and the altar cloths of the Temple almost appear to bloom with these same colors. Meanwhile, Simeon and Anna model muted tones and assume postures that align them with the form of the building itself.  Anna stands erect, almost stiff, the lines of her elderly body as vertical as the columns around her. By contrast, the aged Simeon hunches over the Baby Jesus, the curve of his elderly spine mimicking the curve of the ancient Temple’s central arch.  The visual message is that the presence of God no longer resides in this building, within these walls, under this roof. It resides in what God initiated with Mary and completed in Jesus: the fulfillment of His promises and His presence with us in the flesh.

“The visual message is that the presence of God no longer resides in this building, within these walls, under this roof. It resides in what God initiated with Mary and completed in Jesus: the fulfillment of His promises and His presence with us in the flesh.”

It would be easy to see nothing more than a supercessionist message in the artist’s choices. However, we would do well to note that the architecture in this icon, while clearly representing the Temple (the biblical setting of the scene), is modeled after a Medieval cathedral, the contemporary worship setting of the artist.  Such anachronistic flourishes are prevalent in Western art (think of all the Nativity scenes set in Renaissance Italian villages).  The purpose of these flourishes is to bring biblical events forward in time, from the past into the present, to remind the viewer that these events still resonate and have meaning for today.   And Candlemas does have meaning for today–profound meaning.  That gap between Jesus’ hands and Mary’s arms still exists.  Jesus is still reaching, still enfolded in the traditions of the past but leaning forward into God’s future.  God hasn’t traded a Temple for a church, one building for another.  He is still refusing to be enfolded (and entrapped!) in man-made forms, structures, and expectations–including mine…and yours.  He is still pulling us and our understandings of God, His promises, and His purposes deeper and further.

The Stars Are Brightly Falling

Call to Worship: Christmas Eve “Tonight, the angels sing and the...

Call to Worship for Epiphany