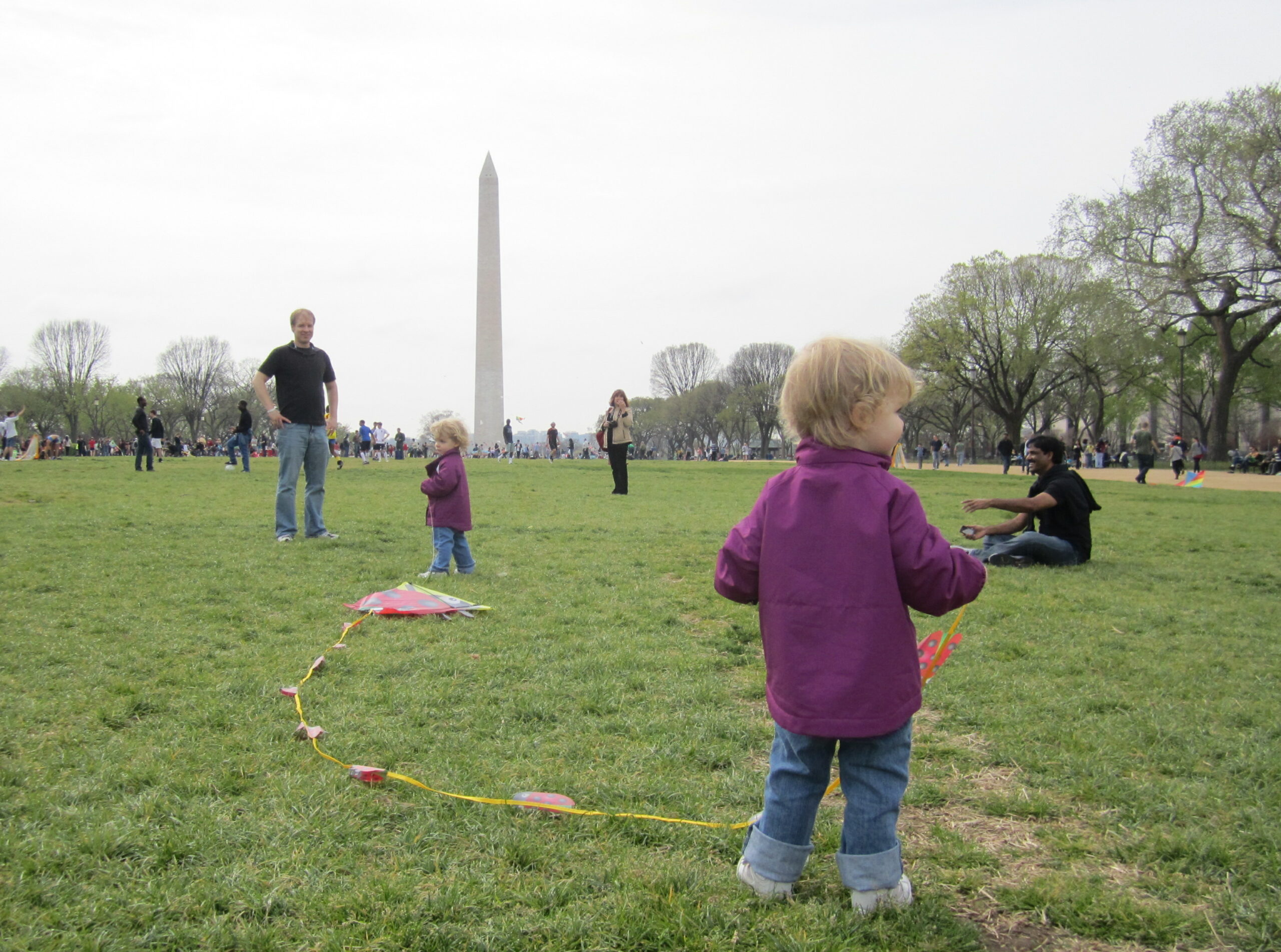 Like many Americans I am struggling to come to terms with the recent insurrection at the Capitol building. US political coverage is always more difficult to come by in Canada, so I’ve been spending the last week refreshing the Washington Post website and listening to The Daily (the New York Time’s morning podcast) to stay abreast of the latest developments[1]. However, it wasn’t until I saw photographs of the rioters marching from the site of Trump’s rally at the Washington Monument across the green of the National Mall to the Capitol Building that I actually broke down and cried.  It was like opening the front door and seeing vandals traipsing across my own front yard. In fact the National Mall is often referred to as “America’s Front Yard”.

When the girls were little their greatest wish for their fifth birthday was to ride the antique carousel on the National Mall and eat food from one of the food trucks parked near the National Gallery. When we were fortunate enough to also meet Big Mac, a police horse patrolling the Mall along with his African American officer, the birthday outing achieved “best birthday ever” status.

The National Mall is always a special place. Some of the greatest museums and galleries in the world flank either side of its green expanse and, in accordance with the country’s democratic principles, the museums and galleries of the Smithsonian are completely free to the public so that anyone of any income can enjoy them. As a young family with twin toddlers and not much income, we often loaded our backpack with peanut butter and jelly sandwiches and juice boxes and headed out to the Natural History Museum to have a day out (and so Mary could see the ancient whale skeletons). We would also visit Kermit the Frog at the National Museum of American History and sometimes camp out for hours on the top floor of the Museum of the American Indian where the girls and their friends could play in reproductions of a Native American tipi and an Amazonian stilt house. I will never forget the first time Emma saw a painting by Monet in the National Gallery. Always my wiggly one, she was absolutely transfixed by the painting.

Of course, those museums are also full of evidence that over its 245-year history, America has fallen far short of its stated ideal that all people are created equal. An elevator ride down from Kermit the Frog is the “whites only” Woolworth’s lunch counter from Greensboro, NC, where in 1960 four Black college students staged a sit-in as part of the Civil Rights movement[2]. When Mary and Emma were in second grade, we toured an installation in the Museum of the American Indian comprised of the many treaties the US government has made – and ultimately broken – with Native Americans[3]. That exhibit alone filled several rooms. Women artists and artists of color, excluded for generations, are still under-represented in institutions up and down the Mall.

But the National Mall also testifies to those things America has gotten right. The Mall has long been a place where the people of the United States have exercised their First Amendment right to free speech and peaceful assembly. In any given week, it’s not unusual to see an organized rally on the on the green or a few individuals camped out on a picnic blanket displaying homemade signs. Once we stumbled upon Lady Gaga speaking in front of the Capitol at the National Equality March in October of 2009 and stopped our strollers to listen and let the girls wave a rainbow flag. That march was just one in a long history of large-scale demonstrations going all the way back to an 1894 march of unemployed workers. In 1913, over 5000 women marched for suffrage and, twenty years after them, World War I veterans petitioned the government for their promised bonuses. In 1943, four hundred rabbis gathered on behalf of Jewish victims of Nazi genocide in Europe and spoke with the Vice President on the steps of the Capitol Building[4]. Twenty years after that, in 1963, Rev. Dr. Martin Luther King Jr. delivered his famous “I Have a Dream” speech from the steps of the Lincoln Memorial at the other end of the National Mall during the March on Washington for Jobs and Freedom[5].

In America’s front yard, this shared life of activism and recreation and everything in between showcases America at its best. I’ve seen everything on the National Mall from pick-up soccer games among congressional interns to school kids on a field trip sharing a sack lunch to a colorful Sikh Day parade full of music and dancing to a gospel choir taking the stage at the Smithsonian Folk-life Festival. All of these events are reflections of the diversity that actually does make America great, which is why it hurt so much to see Trump’s riotous mob full of hate and bent on destruction trample that special space.

I’m not naïve. The Capitol Building that was stormed on January 6 was built by enslaved people, some of whom were bought and sold on the National Mall. The members of Congress huddling in the Capitol basement that day were elected by a system rife with racial bias, partisan gridlock, and awash in far too much money. The arc of the moral universe still has a long way to go in its bend toward justice, and we the people are going to have to work hard and put all our weight on it to help it make the turn. But bend it will.

“The arc of the moral universe still has a long way to go in its bend toward justice, and we the people are going to have to work hard and put all our weight on it to help it make the turn. But bend it will.”

The carousel on the National Mall, so beloved by my kids and countless others, was not always accessible to all of the nation’s children. Before finding its present home on the Mall, the carousel was originally a ride at the segregated Gwynn Oak Amusement Park in Baltimore, Maryland. For ten years, area families, college students, clergy members, and activists worked to end the Jim Crow era laws preventing African-American children from enjoying the park. It wasn’t until August 28, 1963, the same day of Marin Luther King Jr.’s speech on the National Mall, that Sharon Langley became the first Black child in Baltimore to ride the carousel. In 1981 the Gwynn Oak carousel was relocated to the National Mall where, as its historic marker states, “it has always been open to everyone and stands as a symbol of the harmony of which Dr. King dreamed[8].” And it is the duty of each generation of Americans to work toward that same dream. Some days we get closer than others. The Blossom Kite Festival, held every year on the National Mall during the National Cherry Blossom Festival, is one of those rare moments that comes pretty close.

The National Cherry Blossom Festival, held every year in Washington D.C. during the last week of March when the first warm breezes of spring are stirring and all the cherry trees around the Tidal Basin have reached “peak bloom,” gets all the attention. Residents along the east coast will drive hours to see the spectacular blossoming of the more than a thousand cherry trees. But even more beautiful to me is the Blossom Kite Festival held near the Washington Monument and stretching the length of the National Mall. During the morning of the Blossom Kite Festival there are kite exhibits and opportunities for children and adults to craft kites. However, the best part occurs in the afternoon when families from all over the Metro D.C. area gather on the Mall to fly kites together, filling the air with thousands of colorful kites. Box kites, dragon kites, intricate homemade kites, and store-bought kites like our “Friendly Ladybug” swarm the sky.

The beauty and diversity of the kites reflects the diversity of the Americans gathering on the nation’s front yard to fly them. African, Asian, and Hispanic Americans, residents and immigrants, same sex couples and collections of college students. Parents whose children are grown and who watch from the sidelines and parents like us who spent as much time running after toddlers as they did running after kites. It was one of the most joyous events I have ever experienced and, I believe, a vision of God’s Heaven here on earth.

Unfortunately, this loving, joyful, inclusive vision of God’s kingdom is not shared by the mob who stormed the Capitol Building over a week ago. Though some carried signs declaring “Jesus Saves,” the Jesus I know, the Prince of Peace who calls for his followers to love their neighbor as they love themselves, does not endorse violent insurrection and white supremacy. These Trump supporters are drunk on a dangerous cocktail of bizarre conspiracies, racist mythologies, and political idolatries shaken and stirred by a failed president desperate for power. This noxious brew is then served up with a twist of Christianity to make it more palatable for the 78% of evangelicals that endorse Christian nationalism[9]. It’s a warped ideology that resembles actual Christianity as much as one of those carousel horses on the Mall embodies Big Mac the police horse.

For the first time in the forty years that presidential inaugurations have been held on the west side of the Capitol Building, the National Mall is now completely shut down. The Washington Monument, the Lincoln Memorial, and the area around the Jefferson Monument where cherry trees huddle against the cold are all closed[10]. As the nation begins a new chapter in government “of the people, by the people, and for the people” the people will not be there to see it[11].  No vendors hawking tacky t-shirts or miniature American flags, no prayer vigils or protests, no children hoisted high on their parent’s shoulders to get a glimpse of history.   America’s front yard will be empty. When I think upon all my happy memories on the National Mall, and all the momentous historic occasions that have taken place there, I’m filled with a deep, immeasurable sadness at what has been lost this Inauguration Day and what America could lose going forward.

Perhaps those of us who choose the path of the idealist should use this time to ponder just what kind of America we want to see when the National Mall reopens. America as a nation has strayed far from its democratic roots, and American Christianity as a faith has far to go to reclaim its witness; but I don’t think either goal is beyond our grasp. I’ve seen it. It’s not just a dream, it’s a reality regularly showcased in our own front yard. Children and families of all ethnicities, all identities, of all backgrounds and beliefs flying kites together, riding a desegregated carousel together, playing under cherry trees together. And just as those cherry tree blossoms that now lie dormant will return in the spring, America can also bloom again.

[4] Histories of the National Mall: Who Protested on the Mall Before the Famous 1963 March on Washington?

[6] The Declaration of Independence at the National Archives

[7] The Constitution at the National Archives

[8] Nathan, Amy. “Round and Round Together” Paul Dry Books, 2011. a YA book about the Desegregation of the Gwynn Oak Carousel.

[11] The Gettysburg Address at Cornell University

Not In My Front Yard