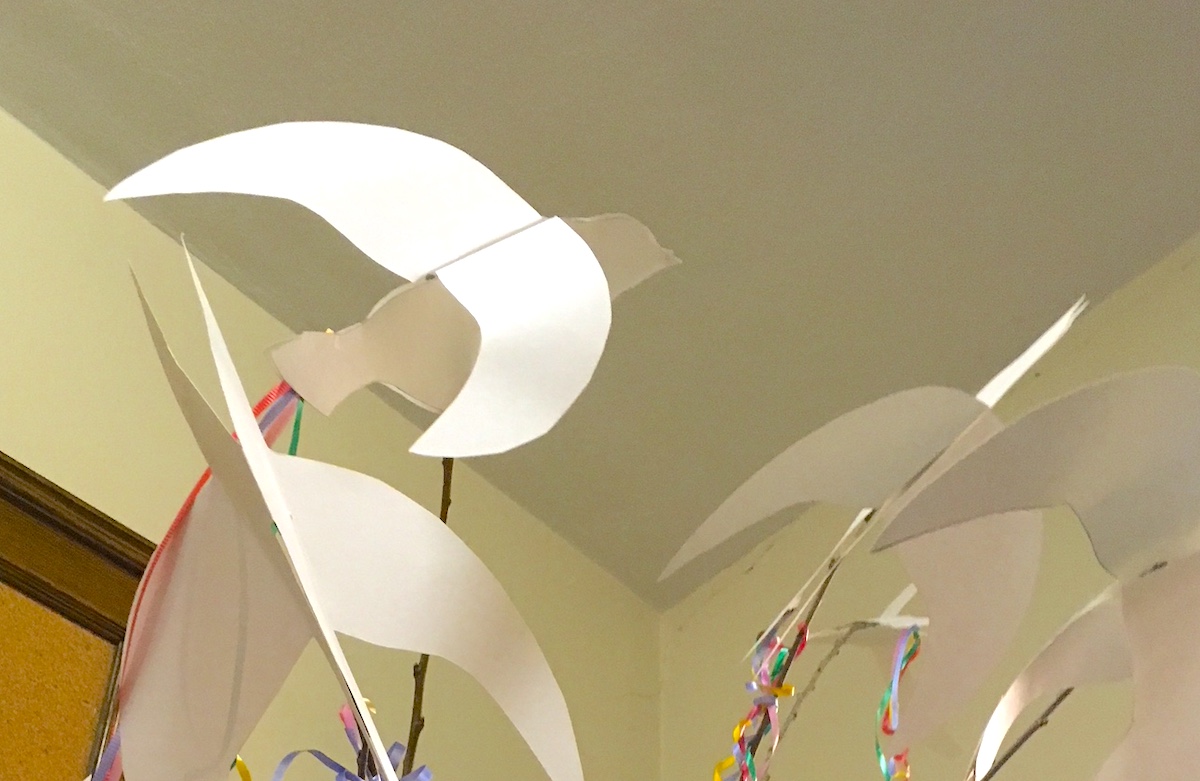 I initially created these paper birds for an Easter processional to accompany the theme “Sing a New Song,” but they are equally appropriate for Pentecost, the Peace Sunday of Advent, Christ’s Baptism, or perhaps even Mother’s Day. I began this project by creating a bird pattern out of poster board. Any bird shape will do as long as it is in profile and created so that it forms a mirror image connected at the base. This is easy to do by tracing a bird image, then flipping it and tracing it again. Because I planned to eventually fold the wings down to give the illusion of flight, and I new the doves would be seen from a distance by the congregation, I exaggerated the wings in my pattern for emphasis.

The next step in the process was to trace my pattern repeatedly on additional sheets of poster board until I had all the birds I needed. I then cut them out.

To help the doves take flight, I used long tapered branches that my neighbors had trimmed from a bush on the side of their house and left for pick up. The branches fit perfectly with our natural floral arrangements and emphasis on creation. Finding these branches was a stroke of luck. The way they tapered and curved created a nice arch and motion for the paper birds as the children processed through the sanctuary. However, if you’re not lucky enough to find such branches, dowel rods would work.

I folded the cut out birds in half, sandwiching the sticks between either side. I taped the sticks in place and glued the two halves of the bird together, leaving the two sides of the tail unglued. To add celebratory color and additional movement to the doves, I taped together strands of curling ribbon into a long “tassel” and curled the ends with scissors. For Easter I used a rainbow of colors that complimented the floral arrangements. But for Pentecost red and gold ribbons would work well. This cluster I fastened between the two sides of the tail with tape. To finish off the bird I then folded down the wings so they were perpendicular to the dove’s body.

On Easter Sunday the children and I paraded through the sanctuary holding our birds aloft and bobbing them slightly to make the wings “flap.” I was told the effect was very life like and added allot to the service.

Weaving Our Testimonies Together: Banners