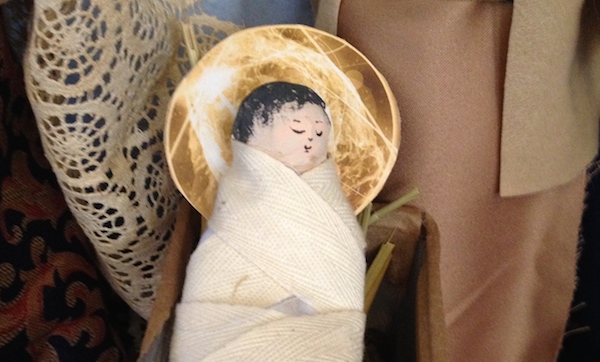 Onward into Christmas?  It’s January 6th.  Schools are back in session.  There isn’t a silver bell or a red cup to be found.  This post is a little late, don’t you think?  Shouldn’t you just file it away until December comes ’round again in another 328 shopping days?

Actually, I think January 6th is a perfect day for this post.  Liturgically, today is the day after Christmas in the Western Christian tradition (yesterday was the twelfth day).  In the Eastern Orthodox world, tomorrow (January 7th) is Christmas Day.  Today we also celebrate Epiphany – the commemoration of the Magi (members of a Persian priestly caste) finding and presenting the Christ Child with their gifts of gold, frankincense, and myrrh.

So Christmas isn’t over.  And if we are going to live as the people of Jesus in this new year of 2015, we can’t let it be over anytime soon.  Christmas has to be more than a day or a finite season of lights, trees, gifts, and gingerbread houses, more than a spiritual “diet” we undertake for a little while each December, even as we indulge in all manner of sweets and treats.  Christmas has to become a way of life.

To help us remember and proclaim Christmas before and after December 25 at First Baptist Hyattsville, we’ve created a tiered Nativity.  Rather than a simple manger scene with a few shepherds and animals gathered ’round, my wife, Kristen (the Nativity’s chief dreamer, designer, and set builder), sought to portray the entire narrative from start to finish.  The project became more elaborate and ambitious with each passing week, but it came together beautifully – and at just the right time.

If we’ve ever needed to hear, remember, and ponder the Christmas story, we’ve needed it this holiday season.  The end of 2014 was a particularly bleak midwinter.  Clouds of grief have hung low and heavy since autumn: Michael Brown and Darren Wilson. Eric Garner and Daniel Pantaleo. Wenjian Liu and Rafael Ramos.  Bradley Stone.  Syria.  ISIS.  Cyber attacks. Peaceful protests turned violent.  News footage edited to make it seem as if protestors were championing violent retaliation when they were not.  132 Pakistani school children massacred.  Just before Christmas Day, I learned that a seminary classmate of mine lost her brave, four-year bout with cancer at age 36.  Just after Christmas Day, a two-year-old somehow managed to shoot his mother dead in a Walmart with the gun she carried in her purse.  Then, this past weekend, I learned that another classmate of mine had committed suicide.  In the wake of all this news, Isaiah’s line about “a people who walked in deep darkness” rings much more prescient and less poetic in my ears.  I have been squinting and straining to see the light shining in this darkness, despite Scripture’s reassurances.

That’s why I have found this Nativity to be so special.  Each scene tells a piece of the story, beginning in the Old Testament with the psalmist lamenting the fate of God’s people. It begins in darkness.  You brought a vine out of Egypt; you drove out the nations and planted it. You cleared the ground for it; it took deep root and filled the land…. Why then have you broken down its walls, so that all who pass along the way pluck its fruit?  The boar from the forest ravages it, and all that move in the field feed on it. Turn again, O God of hosts; look down from heaven, and see; have regard for this vine….(Psalm 80.8, 12, 14).

And the Lord does see.  The Lord does have regard for this vine. There is a glimmer of light.  Through the prophet Isaiah, God promises that He will redeem, revive, and restore Israel. They will be called oaks of righteousness, the planting of the Lord, to display his glory. They shall build up the ancient ruins, they shall raise up the former devastations; they shall repair the ruined cities, the devastations of many generations…. For I the Lord love justice, I hate robbery and wrongdoing; I will faithfully give them their recompense, and I will make an everlasting covenant with them (Isaiah 61.3-4, 8).

Then an angel of the Lord appears appears to a young woman – living in boondocks of Nazareth, of all places – to proclaim how God will accomplish this redemption and establish this covenant. “Greetings, favored one! The Lord is with you….. Do not be afraid, Mary, for you have found favor with God.  And now, you will conceive in your womb and bear a son, and you will name him Jesus.  He will be great, and will be called the Son of the Most High, and the Lord God will give to him the throne of his ancestor David.  He will reign over the house of Jacob forever, and of his kingdom there will be no end.”

“And now, your relative Elizabeth in her old age has also conceived a son; and this is the sixth month for her who was said to be barren. For nothing will be impossible with God.” Then Mary said, “Here am I, the servant of the Lord; let it be with me according to your word” (Luke 1. 28-33, 38).

Jesus, the one greater than John, the heir to the throne of David, will be a King like no other king.  Fittingly, then, when Mary’s time comes He is not born as other kings are born – though not in the different way we might presume. Jesus is born without earthly fanfare, in a makeshift hotel room, firmly under the thumb of another ruler, Caesar Augustus.  Mary may be expecting the Savior of the world, but she and Joseph must still travel some seventy miles (on foot or by hoof, while she is her third trimester!) from Nazareth to Bethlehem so that they might be counted (and taxed!). In those days a decree went out from Emperor Augustus that all the world should be registered. This was the first registration and was taken while Quirinius was governor of Syria.  All went to their own towns to be registered. Joseph also went from the town of Nazareth in Galilee to Judea, to the city of David called Bethlehem, because he was descended from the house and family of David. He went to be registered with Mary, to whom he was engaged and who was expecting a child.  (Luke 2.1-5).

The son whom Mary’s cousin, Elizabeth, is carrying is John the Baptizer, the “voice crying in the wilderness” who “prepares the way of the Lord” (Isaiah 40.3; Mark 1.3).  People from Jerusalem and all Judea flock to him, repenting and receiving baptism in the River Jordan. John is the first prophet Israel has seen in generations.  God is moving.  But John’s presence and proclamation is just the prelude. “The one who is more powerful than I is coming after me; I am not worthy to stoop down and untie the thong of his sandals.  I have baptized you with water; but he will baptize you with the Holy Spirit” (Mark 1.7-8).

It is in Bethlehem, while Mary and Joseph are on this compelled journey, that Jesus is born.

That’s why I love and crave this story. Christmas is a reminder that God has not forgotten or forsaken His people, but it is not a sentimental nor antiseptic tale.  It’s the story of how the Son of God, the Prince of Peace, was born in a stable in the thick of the very messy, gritty, and often smelly reality of this world. It’s a story for a world in which things aren’t always as we would have them (for ourselves, our friends, even our enemies). It’s a story about how God sees us through, even when systems and communities and relationships seem corrupt, self- serving, or ruined beyond repair.  It’s a story of hope: that on a dark, mundane night an angel choir exploded the starless sky to sing glory to God in the highest and bring tidings of great joy for all people, because the life that is the light of all people, the Divine Word of God, the light that shines in the darkness and the darkness did not overcome, became flesh and dwelt among us (John 1.1-14).

That is the deeper reason why I have returned to this Nativity time and again to pray, ponder, and reflect – why it has helped me to see light in our present darkness. Yes, it conveys the Christmas story beautifully in its artistry; but it also conveys the story through how it was made.  We constructed it almost entirely out of recycled and reclaimed materials, the things we normally discard without a second thought: bottles, cans, paper plates, cardboard boxes, bits of yarn, dryer lent, broken doll parts, paper towel tubes, candy wrappers, egg cartons, newspaper, popsicle sticks, scraps of fabric, styrofoam cups, and a variety of other things.

Something beautiful arose out of the piles of junk we collected over several weeks.  And it all came to life through the efforts, donations, and contributions of several people within our congregation: young and old, rich and poor, black and white.

That’s why I believe this Nativity demonstrates tangibly why Christmas is the way forward, through the clouds of grief that cast their shadow over the final weeks of 2014. And that’s why I’m not saving this post until the end of 2015. When we dream and work together, amazing, beautiful things take shape – even when used up, worn out, unwanted stuff is what we have to work with.

“In the Christmas story, division, isolation, and presumption are all challenged and subverted at every turn.”

The pain and grief that has dominated the news in recent weeks stems largely from division, isolation, and presumption about what people and life can and cannot be. In the Christmas story, division, isolation, and presumption are all challenged and subverted at every turn.  Those who should be most aware of the Messiah’s coming (Herod and his scribes in Jerusalem) are clueless, while a band of pagan priests from the land where Israel was formerly in exile (Persia), have not only seen the Messiah’s star, they have followed it for some distance to pay Him homage.  Shepherds, angels, Jews, Gentiles, the barren and the blessed are all enfolded into God’s redemptive, transformative work.   And the world changed.  That change didn’t happen all at once, and it didn’t happen over night.  The story of Christmas stretches back generations to the psalmists and the prophets, and it extends forward to Jesus and His disciples long after the Magi returned to Persia and Mary and Joseph returned to Nazareth.  But change happened.

Let’s resolve to keep Christmas continually before us in 2015 , to embody it now that we’ve celebrated it, to allow it to become the stuff out of which our lives are made.  Repairing and rebuilding “the former devastations” takes effort beyond hope and promise.  It’s ongoing work.  But it is possible!

Christmas isn’t over. Now that Jesus has come, it’s the beginning of why He came.