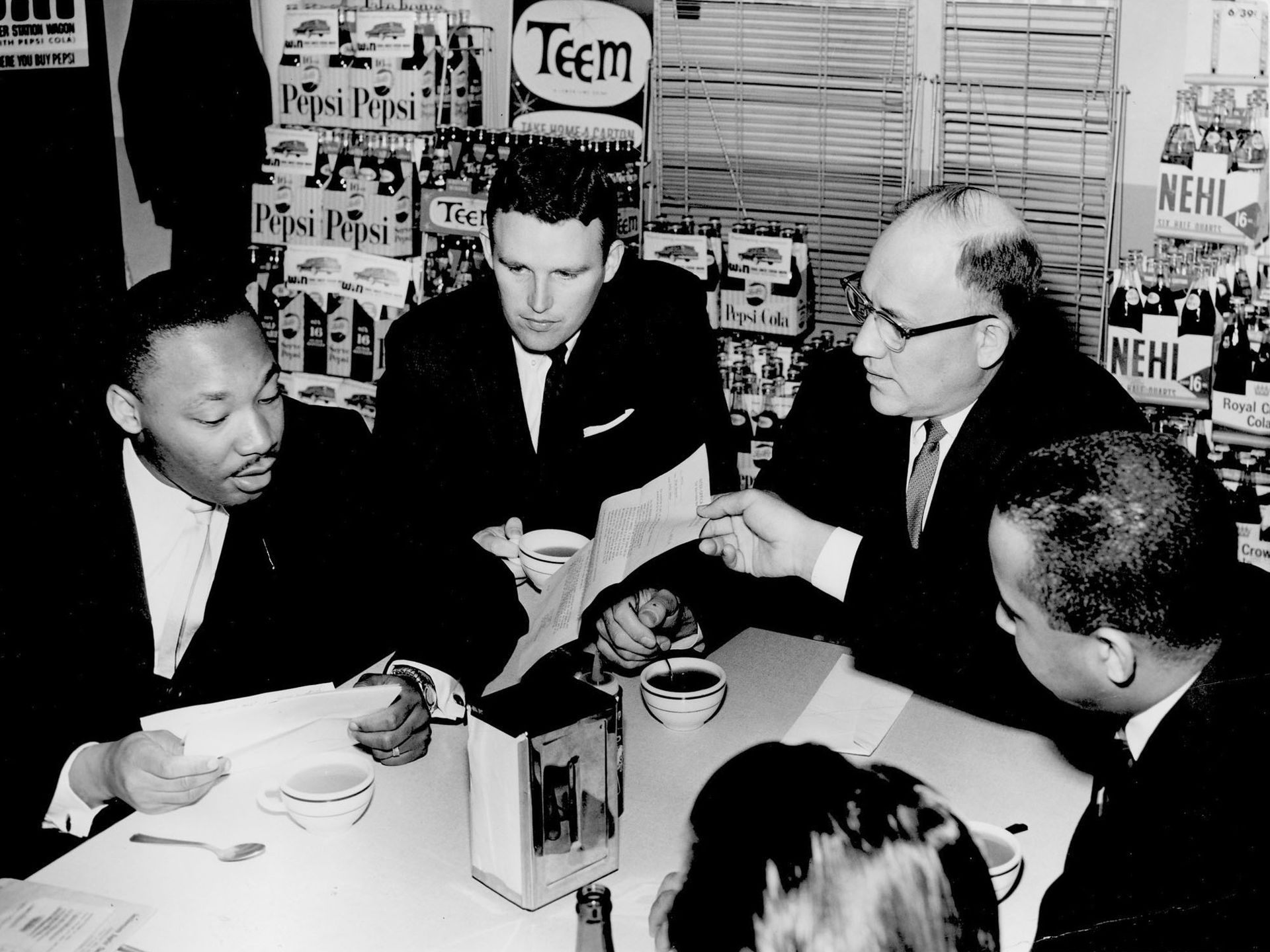 September 3rd marks the tenth anniversary of the death of my dear friend and mentor, John Claypool. To commemorate his passing – and celebrate his enduring legacy – I’ve composed this reflection, portions of which appear in the September 2015 issue of Baptists Today, alongside the reminiscences of others who were fortunate enough to learn from him during his time at the McAfee School of Theology.

I don’t have to look far to be reminded of John Claypool each day. In our house hangs a copy of a black and white photograph showing the Rev. Dr. Claypool and the Rev. Dr. Martin Luther King, Jr. having coffee in the refectory of Southern Seminary on the day the civil rights icon visited the campus in 1961. It’s very special to me – and not just for featuring two men whom I believe to be 20th century saints in the same frame. It’s special because, like most everything to do with John Claypool, there’s a story behind it: a story about choosing love and grace over all other available options.

My wife gave me this photograph as a Christmas present. Dr. Claypool brought the original from the Louisville Courier-Journal with him to class one day in 2002 as a prelude to the day’s lesson. As an aspiring preacher, seeing my professor with Martin Luther King, Jr. was like a basketball player seeing his coach with Michael Jordan. But Dr. Claypool hadn’t brought the picture to brag. He’d brought it to illustrate a point. That picture got him into a whole lot of trouble.

Dr. Claypool was the Pastor of Crescent Hill Baptist Church in Louisville at the time, and as soon as the paper hit the stands he knew he had to brace for the backlash. It was one thing to be present when the prestigious Southern Seminary hosted a controversial but undeniably significant figure like King; it was quite another to be spotted sharing refreshment with a Black man, especially an “agitator” and a rumored Communist. Dr. Claypool knew what people in town would think – and perhaps do. But Dr. King had asked if there was a place to get a cup of coffee before he gave his address, so Dr. Claypool led the way. To hear him tell it, it was as simple as that. Of course, what he really did was make a profound choice. He chose the grace of hospitality over the safety of propriety. He chose to share a cup of coffee in calm, holy defiance of his culture’s bigoted, ungodly conventions.

The humility with which Dr. Claypool shared this photograph, and the openness with which he told the story behind it, forever endeared him to me as a mentor and exemplar of prophetic pastoral leadership. Throughout our time together, Dr. Claypool impressed upon me that simple but purposeful acts lie at the heart of Christian witness. Living intentionally out of Christ’s love, compassion, and generosity matters more than profound exegesis or homiletic agility. It’s through such simple yet purposeful acts, like welcoming the outsider, that you tell Christ’s story through your story. It’s through such simple yet purposeful acts, like the breaking of bread and the sharing of a cup, that God has long revealed God’s self.

I am one of the many to whom God revealed God’s self more fully through the simple yet purposeful witness of John Claypool. His humble, confessional reflections on the grief and joy of this world, and the mystery and wonder of the Holy, have helped me navigate the complex task of living faithfully in a complex world. He’s also inspired me to directly engage the civil rights issues of today. I’ve often wondered how he’d respond to the recent police shootings, and the riots, and the mass incarceration of Black men. No doubt he’d be offering refreshment, physical and spiritual, to anyone in need – and getting into what John Lewis has called “the right kind of trouble.”