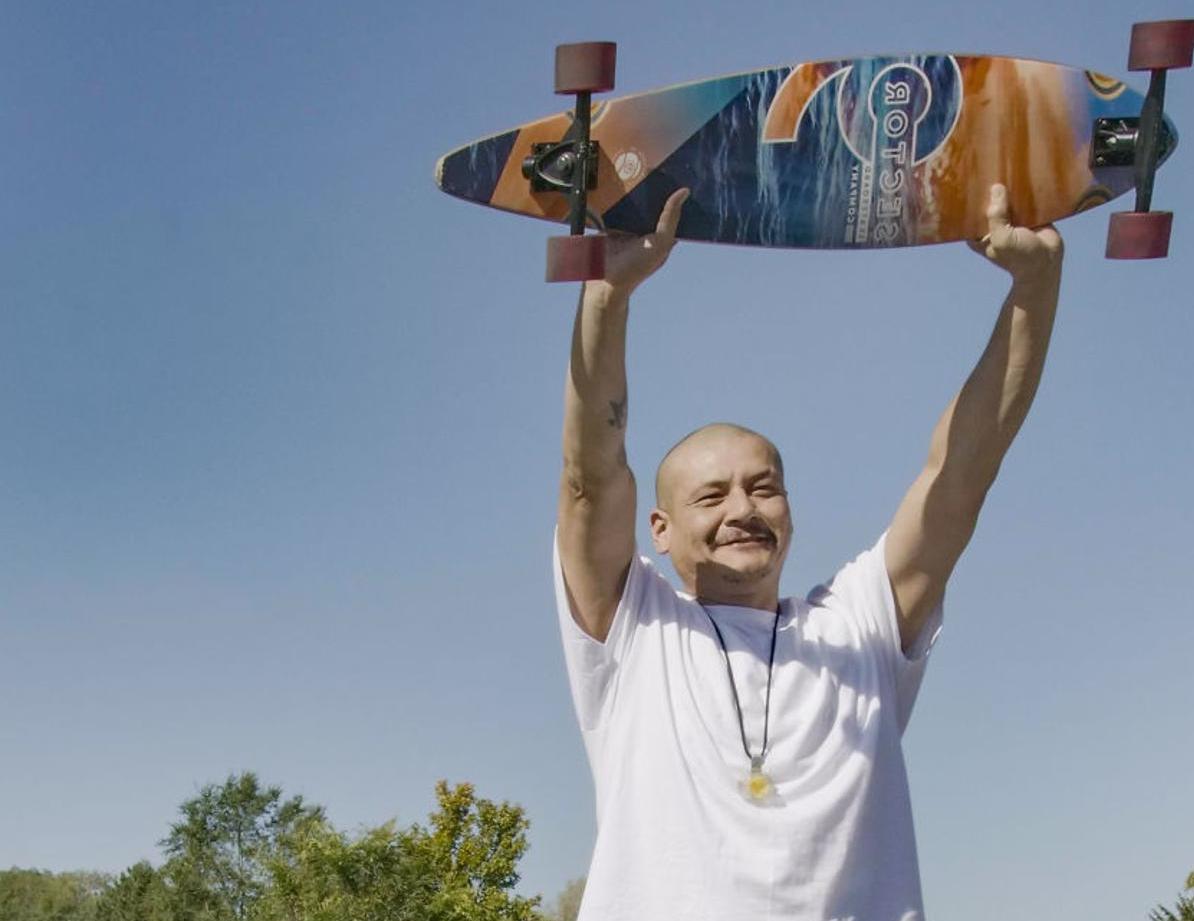 If you’re one of the cool kids on TikTok, then you already know about Nathan Apodaca’s video of himself skateboarding while drinking Cran-raspberry juice and listening to Fleetwood Mac’s “Dreams.” If you’re the parent of one of the cool kids, then you just learned about this viral video via NPR. As Nathan Apodaca explained to the NPR reporter, his truck broke down on the way to work, and rather than wait for someone to pull over to help, which didn’t seem likely, he grabbed his skateboard and his bottle of juice and cruised the last 2 miles to work. As he’s rolling down the highway, he turns on the TikTok account his daughter made for him and records a short video of himself lip-syncing to Fleetwood Mac’s 1977 hit single “Dreams.” Nathan posted the 22 second video to his account and went on with his day. Within the hour, his post had 100,000 views. Now, it has 35 million views and climbing as well as 134,000 tribute videos by everyone from Jimmy Fallon to Mick Fleetwood himself skateboarding and swigging cranberry juice.

My daughters and I love this video. It’s hard to explain just why. Something about the combination of whimsy and spontaneity really speaks to us. As Mick Fleetwood said when asked about the video, “It was heartfelt. It was fun, and God knows we need some of that right now.” What we also need is the ability to “rejoice always, pray without ceasing, give thanks in all circumstances” as the Apostle Paul writes in I Thessalonians (5:16-18). Nathan Apodaca is a great example of this.

When his well-traveled truck refused to go any farther, Nathan could have responded by becoming upset or angry. He might have worried about losing his job at the factory or been anxious about coming up with the money to repair his truck. He might have fallen into despair at one more thing going wrong in 2020. But Nathan Apodaca does none of these things. Instead he finds an alternative way, not just to get to work, but to be. He is able to find joy in the rush of the wind on his face, the glow of the morning sun, the taste of the juice and the beat of the music. Not only that, he shares that joy with others. Our ability to find joy and give thanks in all circumstances can be contagious if we let it be.

For Nathan Apodaca, finding and sharing that joy paid off. The Ocean Spray company gave him a new truck, cranberry colored of course, and a supply of Cran-raspberry juice. Fans of the TikTok video have donated to his account to show their appreciation, and now he has almost enough for a downpayment on a house to replace the RV he is currently living in that has no running water. It’s an uplifting ending, and I couldn’t be happier for him and his family.

Of course a payoff like that is not our motivation. As Baptists, we would at least expect grape juice (just kidding). No, Paul reminds his readers in his parting words, we rejoice, pray, and give thanks because “it is the will of God in Christ Jesus.” In fact, these are just three of the things we are commanded to do. The preceding verses instruct the church to “admonish the idlers, encourage the fainthearted, help the weak, be patient with all of them. See that none of you repays evil for evil, but always seek to do good to one another and to all.”

The church at Thessalonika thought the end of the world and Christ’s return would be imminent. They were looking for signs and some catastrophe to usher in a new age. It would have been easy for them to either selfishly hunker down and wait it out, or go full YOLO (NPR informs me this means “You Only Live Once”) and selfishly grab everything they can while they still can. That is the kind of behavior the prophets spoke out against as Paul reminds the church in verse 20. Because God’s will is, as it has always been, for us to live every moment unselfishly with care and concern for others. We need to be actively looking for reasons to rejoice and opportunities to give thanks rather then omens of the end times.

No doubt, 2020 has been a horrible year and there are many days when rejoicing and giving thanks are the last things we feel like doing. At those times we need to pause and take stock, and find those things for which we are thankful, even if it’s just a skateboard and some Stevie Nicks and let our thanks fuel our joy. Then we need to share that joy with others and “encourage and build up each other”(v.11), “help the weak,” “seek to do good,” and “be patient with all”(v.14).

Holding on to good, as Paul instructs in verse 21, can be hard, but Nathan Apodaca’s 35 million views show us that people are desperately looking for good things to cling to in these difficult times. Over 100,000 fans made tribute videos of themselves skateboarding as a way to emulate his example and share the joy. The diversity of the participants is joyful in itself. A young woman in a hijab, a few dudes with dogs riding shotgun in backpacks, at least two police officers in uniform. Often the skaters add their own twists. One man replaces the juice with a taco and another wearing a fur hat and plaid shirt chugs a bottle of maple syrup. I will have to keep an eye out for him on the streets of Toronto.

When we live according to the will of God in Christ Jesus, as it is set forth in I Thessalonians, (loving, helping, rejoicing, praying, encouraging, being thankful, seeking peace and goodness) then we too will be living in a way that attracts and inspires others to do the same. We are not alone. It is God’s will, and God has not abandoned us on the side of the road, but has given us Jesus Christ as an alternative way forward. So, in these broken down times, cling to the Good, do in remembrance as you swig your juice, be encouraged by the Holy Spirit in whatever way the Spirit is moving. And if it’s a skateboard, Cran-raspberry juice and Fleetwood Mac, I’m okay with that and I think God is too.