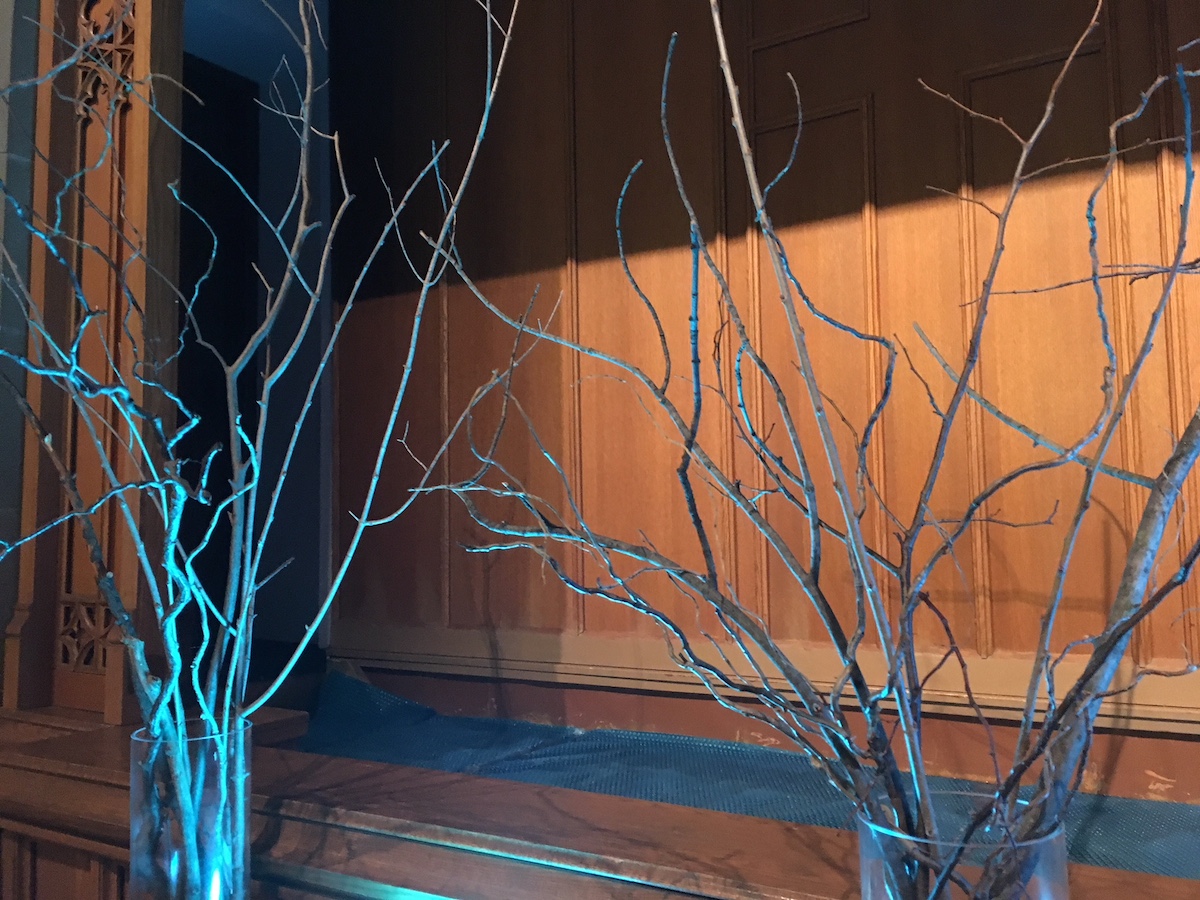 In the Catholic tradition the services conducted Thursday through Saturday of Holy Week are sometimes referred to as the Tenebrae service. From the Latin, the word “tenebrae” can be translated as “darkness” and the service is comprised of readings of scripture and the extinguishing of candles thereby making the sanctuary progressively darker. Sometimes referred to as a Service of Shadows this Holy Week service has been adapted into what most churches recognize as a Good Friday Service.

“I hit upon the concept of converting the sanctuary into a sort of Garden of Gethsemane so that the congregation might feel they were with Christ and the disciples in the garden.”

As I was considering how to decorate the sanctuary to create a more meaningful Good Friday Service, I was struck by the worship service’s original name and the idea of shadows and darkness. Because the scriptures for this service usually center around the Passion narrative and / or Christ’s seven last words, I wanted to tie whatever I came up with into these readings. I hit upon the concept of converting the sanctuary into a sort of Garden of Gethsemane so that the congregation might feel they were with Christ and the disciples in the garden. I wanted my version of the “garden” to reflect a theological more than a realistic, naturalistic experience so instead of using lush greenery I went instead with barren, twisted sticks. My hope was that these would also create a nice contrast with the elaborate floral arrangements and banners I had planned for Easter morning. Fortunately I had on my staff a “stick expert” in the form of our collie, Skye.

During the weeks of Lent preceding Holy Week, Skye and I collected various large sticks on our daily walks. The best ones came from a neighbor’s corkscrew willow. The cold weather and snow brought down several large branches along with some smaller ones and with their curly, twisted shapes these made a dramatic addition to our collection of sticks. For the actual installation I arranged the sticks in large vases on either side of the platform and also another vase in front of the pulpit. On the platform in front of the baptistry I arranged more sticks and in front of these placed lights that would cast shadows of the sticks into the baptistry. I used several color changing light bulbs and set them to somber tones to give some depth and understated color to the shadows.

The sticks and the shadows they cast did give our Tenebrae Service some additional ambiance and I think set the mood for the scripture readings and the extinguishing of the candles. Some members of the congregation told me they found it particularly moving when the entire sanctuary was dark save for the lights casting the shadows. If I did this again, I would probably use even more branches and install some of them in the church foyer so that the mood is established as soon as congregants enter the church building. I’m sure my stick expert would agree.

“The Spirit of Haida Gwaii” a Text Poem by Bill Reid

Visio Divina for Rembrandt’s “Christ in the Storm on the Sea...

A Benediction for Ash Wednesday