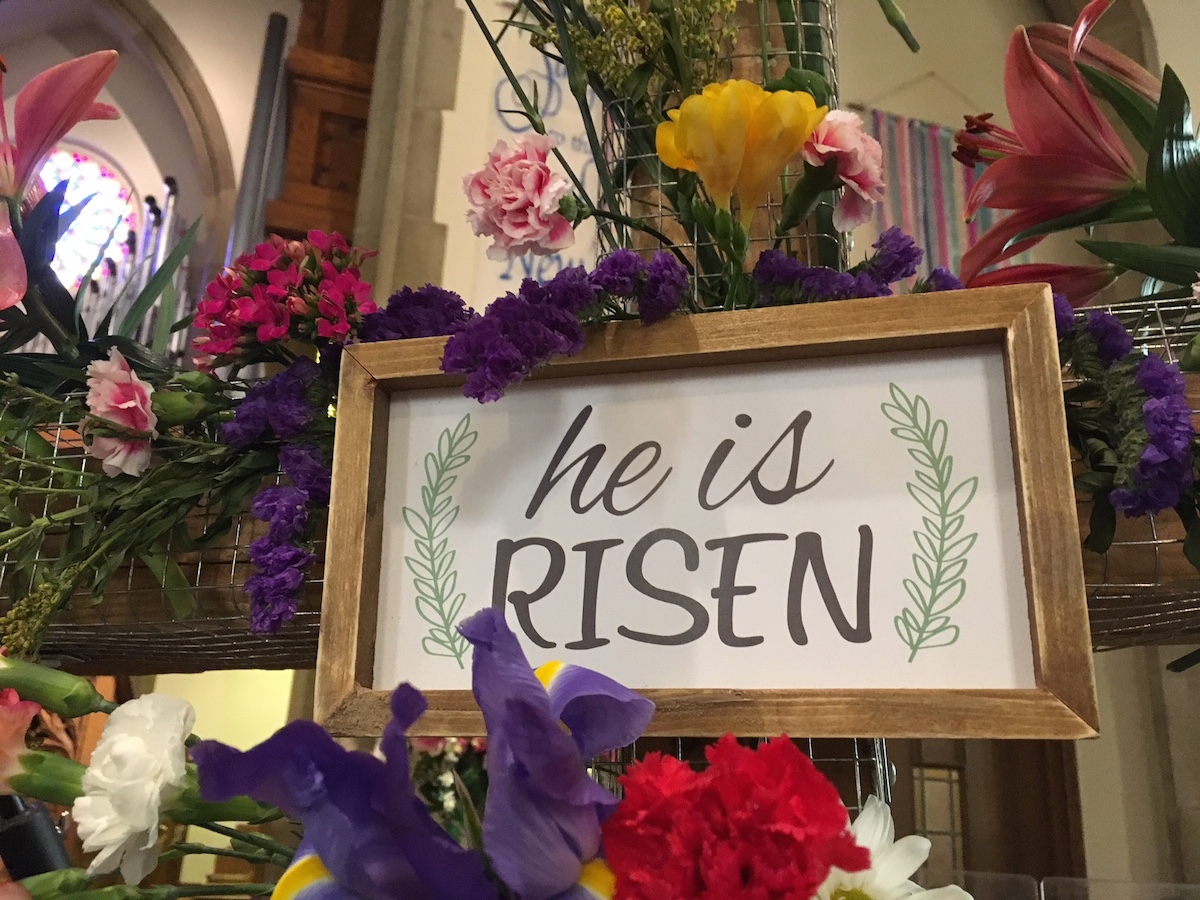 The first time I ever saw a flowering cross, I was visiting Todd in Athens, Georgia back during his days as a Latin scholar at UGA. It was Easter Sunday and First Baptist Athens installed a large cross made of chicken wire out in front of the church for attendees to place flowers into before they entered the sanctuary. Seeing the cross in full bloom after the Easter Sunday service was a stunning metaphor for Christ’s victory of life over death. During our time in church ministry, we’ve used the flower cross at Easter many times and it’s always a beautiful, collaborative project for the congregation. Though ubiquitous across the southern United States, flower crosses are not well known in Canada, because in Canada there are very few flowers blooming on Easter.

It seems obvious to me now, but wasn’t quite so obvious when we decided to undertake a cross of flowers in Toronto. This flowering cross would have to remain an indoor cross rather than stand outside in the unpredictable weather of an April in Canada. Since this was the case, I thought it would be appropriate to expand the metaphor of this living cross and make it more fully part of Holy Week by following it from Palm Sunday through Good Friday to its final transformation on Easter Sunday.

Thankfully we already had a cross that had been wrapped in chicken wire for a previous Remembrance Day Service so all that was required was to situate that cross on a small riser in the sanctuary. I didn’t want the chicken wire to show during the week leading up to Easter Sunday, so I needed a method to cover the wire that also wouldn’t be difficult to remove on Saturday night. With this in mind, I headed to the thrift store where I was fortunate to find a dark purple sheet. After a little trial and error I found it was most effective to tear the sheet into strips and wrap those around the cross, almost like a bandage, pinning as needed. The strips had the benefit of being easier to wrap around the arms of the cross without obscuring it’s shape. An unexpected visual bonus was that the rough edges of the strips gave the cross a shrouded appearance which I thought fit well with the death into life contrast I was hoping to convey.

Since the cross would be up for the full length of Holy Week, I used surplus palms to decorate the now purple cross for Palm Sunday. I also used palms in the altar arrangement, plant stand arrangements and criss-crossed on some of the pillars in the sanctuary where there were convenient hooks. Those who participated in the procession of palms lay their branches around the base of the cross during the Palm Sunday service to replicate the laying of palm branches before Jesus at his triumphal entry.

To change up the cross’s appearance for the Good Friday service, I removed the palm branches and substituted a crown of thorns that I wired to the cross. (This crown of thorns is one of my greatest clearance purchases, I am proud to say. After Easter is a great time to scour the remote corners of your local Christian bookstore for goodies.) The rugged, barren, very stick-like composition of our crown went well with the sticks I used elsewhere in the sanctuary for Good Friday.

The biggest transformation, however, would come on Easter Sunday morning when our cross was freed from it’s shroud and came to life. I really didn’t know what to expect knowing that, unlike Georgia congregations, churchgoers in Toronto couldn’t just snip a few blooms from their yards. We bought a few bouquets to have on standby, but I was pleasantly surprised to find that our cross was easily filled with flowers leftover. Because the church had never seen, let alone assembled a flowering cross, I tucked a few sprigs and some greenery around a plaque I found at Michael’s Arts and Crafts that reads “He is Risen.” Having a coupon, I couldn’t pass it up and it gave our cross a focal point which I think it needed to make the visual journey through Holy Week complete. From palms, to the crown of thorns, to the proclamation that “Christ is Risen”, the cross becomes a visual through line for the entire week and helps the congregation, especially children, to make the connections in the story of Easter.