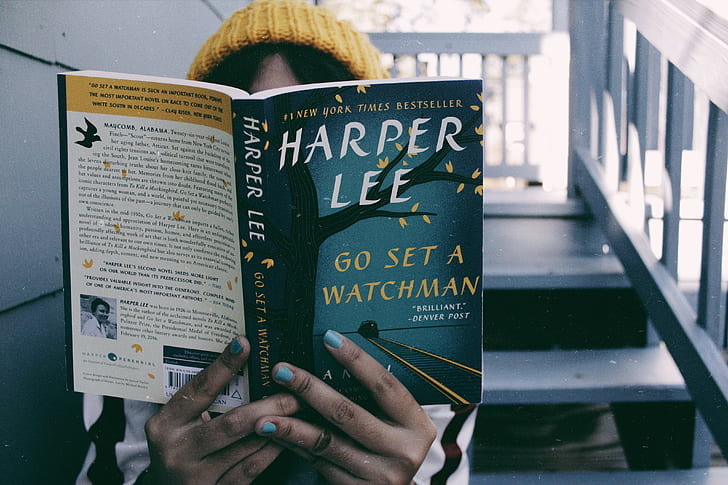 On Tuesday, author and journalist Neely Tucker sat down with Kojo Nnamdi to discuss the release of Harper Lee’s new/old novel, Go Set a Watchman. I had seen the controversy over the characterization of Atticus Finch brewing online since the Wall Street Journal published the first chapter of Watchman last Friday. However, I was unfamiliar with the questionable circumstances surrounding the book’s release. Biographers, close friends, and serious fans of Harper Lee have known about Watchman’s existence for decades, according to Tucker. Yet, Tonja Carter, a lawyer from Lee’s hometown of Monroeville, AL, claimed to have “discovered” the “lost” manuscript when news about Watchman first broke. As the story goes, Carter showed the book to Lee, who enthusiastically endorsed its publication after all these years, even though the aged author suffers from impaired hearing and eyesight as well as the lingering effects of a recent stroke.

These circumstances, combined with the novel’s history, yield a curious mix of fascination and bewilderment. What is this story, exactly, and why now? Chronologically, Watchmantakes place twenty years after To Kill a Mockingbird, and it’s being published fifty-five years after Mockingbird. But Watchman was written first – essentially as a draft of the story that became To Kill a Mockingbird. Thus, Watchman is neither prequel nor sequel nor spinoff. It’s an alternate universe of sorts. Tucker compares the revelations about Atticus Finch’s prejudice in Watchman to James Bond fans learning that 007 has been a KGB double agent all along. No wonder it has many interested readers baffled.

Personally, I was planning to ignore the book. But thanks to Kojo’s interview with Tucker, I now plan to read it. I plan to read it because I’m beginning to wonder if the novel’s publication at this point in American history is, despite the controversy, serendipitous. Watchman may prove to be the book White America needs in order to have the conversation about race and racism that we need to have. Here’s the segment of the Tucker interview that changed my mind:

Tucker: “In Go Set a Watchman, Atticus Finch has regressed, devolved from being that [heroic] character [from To Kill a Mockingbird] to being a petty bigot and racist…. [W]hile he might not have wanted Tom Robinson, the black man unjustly charged with raping a white woman in To Kill a Mockingbird…. taken out and lynched, he absolutely, it turns out in Watchman, wanted him to be and every other Black character to be kept in their place.”

“You’ll remember this last scene, it’s this iconic moment, particularly in the movie with Gregory Peck, where he fights this doomed battle to win Robinson an acquittal, and he’s walking out of the courtroom and all of the Black people in the little town of Maycomb are up there in the balcony, right, where they have to sit by segregation and Scout is up there with them at 9-years-old, and one of the people prods her and says, ‘Stand up, Scout. Your Daddy’s passing.’ And it turns out in this book that’s where Atticus Finch thought all those Black people should be. It’s incredibly bitter.”

More than bitter, the idea that Atticus Finch, of all people, could be racist is appalling to the American conscience – especially the educated, White, affluent, liberal American conscience. It’s appalling because all of us would like to think we’re Atticus Finch at heart. If we had lived “back then,” we’d have been brave and noble and not the least bit bigoted, just like him. We like to think that about our lives even now. We voted for Obama. We’re outraged at the deaths of Trayvon Martin, Michael Brown, Eric Garner, Walter Scott, Freddie Gray, and countless others. We make copious use of #blacklivesmatter on Twitter and Facebook. We cheer the removal of the Confederate Flag from state capitol grounds. We read books and attend conferences on the topic of “social justice.” We may even belong to monthly book clubs that discuss such books, volunteer with the Boys and Girls Club, and participate in the occasional voting rights protest. There couldn’t possibly be a tinge of racism in our hearts or minds. #WeAreAtticusFinch

And yet, by some estimates, 90% of White US citizens have never been inside an African-American home. One study reveals that “the more highly educated and progressive-sounding US Whites are, the less likely they are to be in racially mixed churches or neighborhoods.” [1] For all our “progress,” most of what has changed in recent years is not the way we live, but the way we “speak in public.” [2]

So, yes, Watchman reveals that we are Atticus Finch. We will unabashedly give voice to the cause of justice and disavow systemic racism. But that doesn’t mean we’ve left segregation behind.

Hopefully, the disconcerting appearance of Go Set a Watchman will challenge us to look deeper into ourselves and probe uncomfortable truths concerning the subtle and sinister nature of prejudice. We’ve disposed of the “Whites Only” signs in restaurants and schools. Now, we must confront the unmarked balconies that remain attached to our souls – our individual souls, and our collective, American soul – if we wish to sustain, much less further, the cause of Civil Rights. We must be honest with ourselves that, for even the most boisterous, self-professed progressives among us, we still harbor notions that Black people “should be” in certain places and not others. When we “didn’t expect” our new doctor to be Black, or gaze with curiosity as a Range Rover rounds the corner with a Black couple inside, that’s our inner Atticus wondering what they’re doing out of the balcony. It’s a phenomenon former US Poet Laureate Natasha Trethewey describes as “a deeply ingrained and unexamined notion of racial difference now based in culture as opposed to biology, a milder yet novel version of white supremacy manifest in, for example, racial profiling, unfair and predatory lending practices, disparate incarceration rates, residential and school segregation, discriminatory employment practices and medical racism.” [3]

Perhaps if we can grapple with Atticus’ ironic racism in Go Set a Watchman, we can begin to come to grips with our own. Whether we want to admit it or not, the reason Walter Scott was disgracefully shot in cold blood is directly related to the reason why he doesn’t live next door. To abolish incidents of the former, we will have to deal with the latter.