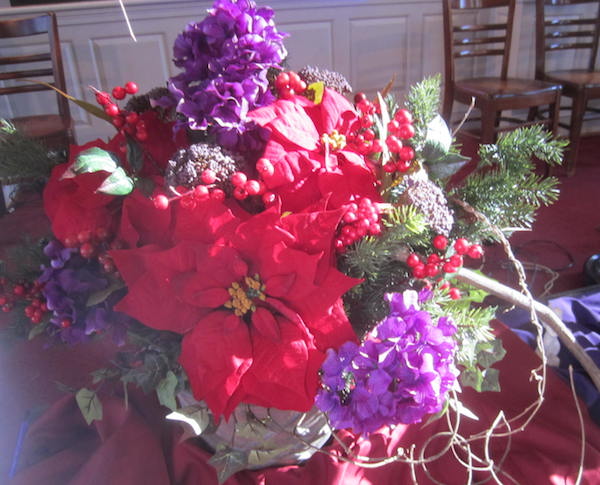 This floral arrangement was inspired by the prophet Isaiah’s words in Chapter 11:1-5, but the materials for this Advent arrangement came straight from our backyard in Maryland. When we first purchased our home, the trellised vine surrounding our patio made a beautiful, shady feature in our rather dull, suburban yard. At the time, I liked to think it added an air of European sophistication which was sorely lacking amidst the chalk drawings of Thomas the Train.

However it wasn’t long before the vine took on a life of its own. Like something out of “Little Shop of Horrors,” our benign vine began to outgrow the trellis, bending and twisting it under the weight of its branches. Tendrils would reach out and snag the girls as they played on the patio. The patio itself cracked and the bricks bordering the flowerbeds shifted and crumbled. We pruned, and pruned, and eventually the pruning became hacking and sawing. Todd tells the epic saga of his struggle with what we eventually dubbed the “Sarlacc” in his blog post “Vine City, USA”

Finally we reached the conclusion that the only way to defeat the vine, was to dig it up by the roots. More pruning, hacking, sawing, and digging followed. We untangled the tendrils and branches from around the warped lattice of the trellis, cutting them down until eventually only the stump remained. I thought we might have to resort to my grandfather’s favorite method of stump removal, dynamite! But, Todd prevailed and soon the stump was unrooted as well.

But what to do with such a worthy adversary? Feature it in an Advent altar arrangement of course! I don’t know what made me think of saving some of the fragments of that monstrous vine for use as our “Root of Jesse” that Advent season, but I’m glad I did. The contrast of the gnarly, dried remains of our nemesis contrasted nicely with the lush evergreen sprigs and bright poinsettias and berries, just like the living shoot of Christ springing from the stump of Jesse.

Did the great vine from our backyard also spring up anew to torment the current owners of the house we left behind in Maryland? I hope not. We tore down the twisted lattice and in the vine’s former lair planted iris, azaleas, and some clematis to climb the trellis. Perhaps the couple who bought our house will “delight” in these as much as I did in the altar arrangement.