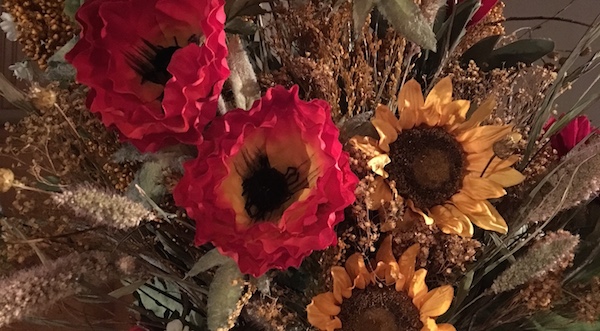 When I found this vase with poppies on it in one of the church’s storage rooms, I knew I had to do something with it for Remembrance Day. Here in Canada, Remembrance Day is a major observance. It would be too simplistic to say it’s the Canadian equivalent of Veterans’ Day. Perhaps, it is what Veteran’s Day once was before it became partisan and overrun by mattress sales.

The First World War holds a special significance for Canadians. It was really the first war in which Canada participated as an equal partner with Great Britain, and the victory by Canadian forces at Vimy Ridge helped to solidify Canada’s place on the international stage. Canadian soldiers made huge sacrifices in the trenches of Europe. The Second Battle of Ypres left tens of thousands dead, many from the chlorine gas that was used on the battlefield or the first time that day. One survivor, Lt.-Col John McCrae, memorialized the loss of his comrades in the poem, “In Flanders Field,” the opening lines of which describe the wild poppies growing between the make-shift crosses on the newly dug graves of the fallen. Canada embraced the poppy as a symbol for veterans and you see poppies everywhere the month before Remembrance Day.

What I’ve enjoyed as an American about discovering Remembrance Day is the solemnity and unity of the occasion. It is a time for reflecting. About War, peace, community, about shared sacrifice on and off the battlefield. Once in a while there are comments from certain corners trying to define who is or isn’t Canadian, or Canadian enough, but they generally aren’t tolerated on Remembrance Day.

I grew up not far from Norfolk, Virginia, home of the world’s largest Naval base. When the fleet was over seas during the Gulf War, the local weatherman would give the forecast for coastal Virginia and coastal Kuwait. On those patriotic holidays like the Fourth of July or Veterans Day, all the service personnel in our church would wear their dress uniforms to church. An honor guard would solemnly parade the flag up the church aisle in complete silence. I am very separation of church and state, and not big on displaying the American or Canadian flag in the church sanctuary, but I confess those Sundays were always very moving. And that I think is what the US has lost in its public observance of Veteran’s Day.

Those serving in the military, I’ve noticed, are often the most reluctant to actually go to war. Not because they are afraid, or unprepared, but because they are aware of the cost and that such things should be undertaken with serious and solemn consideration. In my experience of Remembrance Day in Canada it’s as if the whole nation is annually asked to contemplate the cost of war. Past wars like World War I, but also Canada’s current military conflicts and future ones. Canada still honors its veterans, to be sure, but does so without glorifying war itself. Perhaps this approach, if undertaken in the United States, would result in fewer wars for everyone.

In the video below, Canadian musician, Leonard Cohen, recites McCrae’s beloved poem “In Flanders Field” which continues to be an integral part of Remembrance Day in Canada. A reading of the poem is always included in the Remembrance Day service at Kingsway. Lately, a few historians and activists have started to question the glorification of “In Flanders Field.” Perhaps its last stanza is too bellicose. It seems to endorse the “sunk cost fallacy” where a nation can not pull out of a war because so many lives and resources have already been spent to fight it. This line of thinking is what kept the United States bogged down in Vietnam long past the time when any “positive” outcome could be attained. These are valid points and worth considering along with the original context and inspiration of the poem. And the solemn, contemplative holiday of Remembrance Day is the time to do just that.